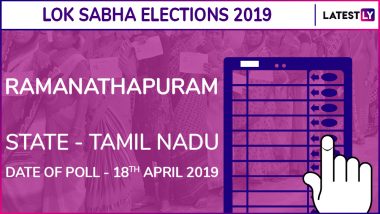 Results for the Ramanathapuram Lok Sabha Constituency in Tamil Nadu has been declared by the Election Commission of India (ECI). K Navaskani of the Indian Union Muslim League Wins This Parliamentary Seat. The counting of votes for the Ramanathapuram Lok Sabha Constituency began at 8 AM on Thursday, May 23. This is one of the 39 Parliamentary constituencies in Tamil Nadu which went to poll on April 18. This parliamentary constituency in the southern state was formed before the elections of 1952. The constituency number of Ramanathapuram is 35 and is not reserved for any category, which means it falls in the general category. According to EC, this constituency consists of 1,133,391 number of voters in total. Out of the total voters, 560,074 are males and 573,317 are females. Lok Sabha Elections 2019 Schedule: Voting In 7 Phases From April 11 to May 19, Counting And Results On May 23; Check All Dates For General Elections.

The Ramanathapuram Lok Sabha Constituency has six Vidhan Sabha segments, one of which is reserved for the SC category and the total number of electors is 1,133,391. It represents the Ramanathapuram District, commonly known as Ramnad.

For the Lok Sabha Elections 2019, the Bharatiya Janata Party (BJP) has fielded Nainar Nagendran from Ramanathapuram. Nagendran, who has been a former AIADMK MLA from Tirunelveli had left the party in 2017 after the infighting in the aftermath of former Chief Minister J Jayalalithaa's death. Meanwhile, the Indian Union Muslim League (IUML) has fielded Nawaz Kani from this seat. Tamil Nadu Lok Sabha Elections 2019 Dates: Constituency-Wise Complete Schedule Of Voting And Results For General Elections.

All the 39 constituency seats of Tamil Nadu will got to poll on April 18. Lok Sabha Elections 2019 will take place across the country between April 11 and May 23 in seven phases. The election results will be announced on May 23.

(The above story first appeared on LatestLY on May 23, 2019 12:26 PM IST. For more news and updates on politics, world, sports, entertainment and lifestyle, log on to our website latestly.com).