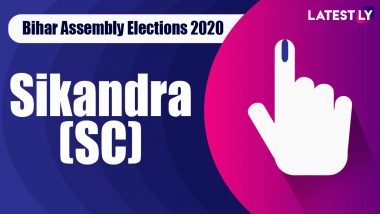 Sikandra (SC) Vidhan Sabha constituency is located in the Jamui district in Bihar. This assembly seat is reserved for a Scheduled Caste (SC) candidate. The Sikandra (SC) Vidhan Sabha seat falls under the Parliamentary constituency of Jamui too. HAM(S)'s Prafful Kumar Manjhi won the seat in Bihar Assembly Elections 2020. The Bihar Vidhan Sabha Elections 2020 began from October 28, and the Bihar elections results were out on November 10.

It was Sudhir Kumar Choudhary of the Congress who won the Sikandra (SC) seat in Bihar Elections 2015, after defeating Subash Choudhary of the LJP. In 2010 Bihar Vidhan Sabha Polls, it was Rameshwar of the JD(U) who won the elections after defeating LJP’s candidate by over 12,000 votes. This time around, the main contenders in the 2020 Assembly Elections were incumbent Congress MLA Sudhir Kumar and Prafulla Manjhi of the Hindustani Awami Morcha (NDA’s ally).

(The above story first appeared on LatestLY on Nov 11, 2020 01:06 PM IST. For more news and updates on politics, world, sports, entertainment and lifestyle, log on to our website latestly.com).