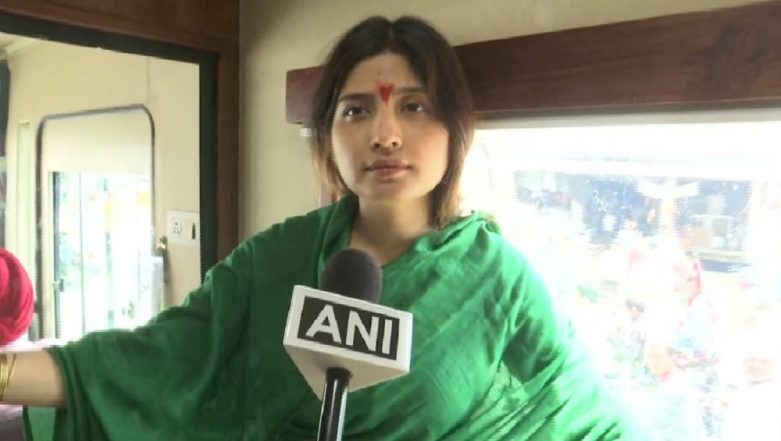 Lucknow, July 16: The by-polls on Uttar Pradesh's Rampur Assembly seat is likely to witness a high profile contest as the BJP and SP are likely to field Jaya Prada and Dimple Yadav, respectively. The by-elections is necessitated after Samajwadi Party (SP) leader Mohd Azam Khan was elected to the Lok Sabha. Khan, who held the seat for nine terms, defeated Jaya Prada to win the Rampur parliamentary seat.

Hinting that Dimple Yadav may be the SP face in the seat, Khan told reporters that she would sweep the elections if she contests. Sources in the BJP said that the party is likely to field Jaya Prada from Rampur. Last week, the actor-turned-politician visited Rampur and spent time interacting with party workers which fuelled speculations of her contesting the by-polls. Azam Khan on Objectionable Remarks Against Jaya Prada: I Will Not Contest Polls if Proved Guilty.

The by-polls are likely to be announced in September. Eleven seats in the state fell vacant after the sitting MLAs were elected to the Lok Sabha. The Hamirpur seat fell vacant after sitting BJP MLA Ashok Chandel was disqualified after his conviction in a murder case.

Dimple Yadav and Jaya Prada were said to be good friends when the later was in the SP. She had won the Rampur Lok Sabha seat in 2004 and 2009. However, she lost the 2014 and 2019 Lok Sabha elections which she contested on a BJP ticket.

Dimple Yadav began her political career in 2009 when she lost a by-election in Ferozabad to Raj Babbar of the Congress. She later won the by-elections on the Kannauj seat unopposed and retained the seat in 2014. In the Lok Sabha elections 2019, she lost to the BJP's Subrat Pathak by margin of around 12,000 votes.