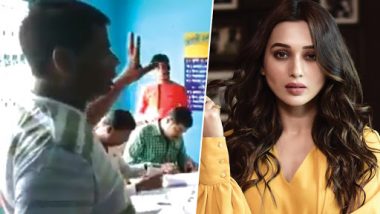 According to the video that is making the rounds as the violation of Model Code of Conduct, Hasan is seen threatening the people to vote to actress Mimi - contesting from Jadavpur constituency on TMC ticket - or else their voter ids would be snatched. Hasan even threatened then that if people don't vote for TMC candidate, then they would not get Rs 2 Lakh as from the state government - given to kin after the death of a member. Lok Sabha Elections 2019: From Mimi Chakroborty to Nusrat Jahan, Full List of Glamorous Movie Stars Given Tickets By TMC in West Bengal.

Threatening to bar people of welfare scheme if voted out of power, Hasan said, "Mrityur pore je 2 lokkho taka pawar kotha, seita aar pabe na. kheyal thake jen, Taile voteta amader dite hobe… amader candidate tomara protekei jaano. (The amount of Rs 2 Lakh you were supposed to get after the demise of your family member, you will not get. Mind it. That is why you will, have to vote for us. You know our candidate very well)."

With the whole speech being recorded and going viral on social media, opposition CPI(M) and Congress is in no mood to let the opportunity go out of hands. A formal complaint of violation of the code of conduct is to be made soon. Though no clarification or comments has arrived from All Indian Trinamool Congress as of yet. West Bengal Lok Sabha Elections 2019 Dates: Constituency-Wise Complete Schedule Of Voting And Results For General Elections.

Lok Sabha elections 2019 will take place in seven phases in West Bengal – beginning from April 11 and would conclude on May 19. The counting of votes and results would be announced on May 23.

(The above story first appeared on LatestLY on Apr 01, 2019 07:42 PM IST. For more news and updates on politics, world, sports, entertainment and lifestyle, log on to our website latestly.com).