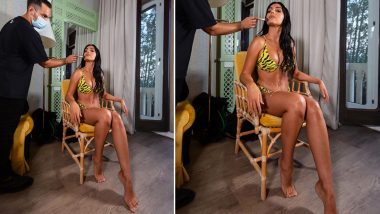 Whereas Georgina has left Instagram breathless as she posed sensuously in a tiny yellow zebra print bikini for a PrettyLittleThing shoot. The brunette flaunted her toned body in this two-piece bikini spilling ample cleavage and toned abs. She also wore a glitzy chequered waistband to bring attention to her flat stomach, while she posed with her makeup artist doing her touch up. Take a look at the picture of Georgina Rodriguez in a tiny animal print bikini:

According to GamblingDeals, who compiled a list of the most expensive engagement rings in football, England keeper Jordan Pickford was second on £500,000 for wife Megan Davison. Ashley Cole’s £275,000 ring for ex-wife Cheryl ranked third.

Georgina and Ronaldo have two-year-old daughter Alana together and are raising his other three children - surrogate twins Eva and Mateo, three, and ten-year-old Cristiano Jr. Georgina and Ronaldo had been isolating with their family - Cristiano Jr, 10, Ronaldo's twins Eva and Mateo, three, and their daughter Alana, two, after relocating from Portugal to Turin in northern Italy. During the COVID-19 pandemic, the family isolated together in Madeira, after three of Ronaldo's team-mates - Daniele Rugani, Paulo Dybala and Blaise Matuidi - were among the first Serie A players to test positive novel coronavirus. They returned to Turin at the start of May and were required to spend 14 days at home in self-isolation as per government rules for international arrivals.

(The above story first appeared on LatestLY on Sep 15, 2020 01:34 PM IST. For more news and updates on politics, world, sports, entertainment and lifestyle, log on to our website latestly.com).