Drinksgiving 2022 Date and Significance: Know History and Ways To Celebrate the Occasion Held a Night Before Thanksgiving Day

DrinksGiving Day is also termed ‘Blackout Wednesday’ which ideally refers to binge drinking on the night before the Thanksgiving holiday in the United States. As festivities are around the corner, local bars and pubs across the US will be jam-packed around this time of the year. 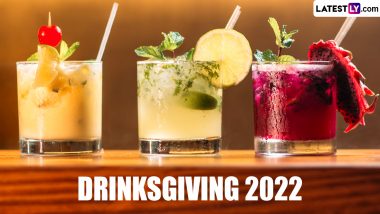 As people are home for Thanksgiving Day, it gives them the opportunity to spend hours together catching up with their friends and enjoying the joyous occasion at breweries. As DrinksGiving day has gained popularity over the years, bars have started organising events and other fun events to mark the day. Thanksgiving 2022 Date in US: Know History, Significance and All About the Day That Celebrates the Blessings of the Past Year in the United States.

As per historical records, the name ‘Drinksgiving’ dates to 2007. However, the concept itself is believed to have originated decades before the name. The world’s oldest brewery was discovered at a prehistoric burial site in 2018. It was found in a cave near Haifa in Israel where researchers found residue of 13,000-year-old beer. They believed that the beer might have been used to honour the dead.

DrinksGiving, as the name suggests, refers to binge drinking and having a joyous time. People enjoy the occasion, majorly because of the involvement of alcohol. As per historical records, evidence of alcoholic beverages dates back to 5,400-5,000 BCE in Hajji, Firuz Tepe in Iran, 3000 BCE in Babylon, 2000 BCE in pre-Hispanic Mexico, and 1500 BCE in Sudan. As per Guinness, the earliest firm evidence of wine production dates back to 6000 BCE in Georgia. Moreover, wine was consumed in Classical Greece is breakfast or at symposia, and in the 1st century BCE, it was part of the diet of most Roman citizens.

As festivities are around the corner, have a fun-filled time with your friends, family and loved ones. Happy Drinksgiving 2022!

(The above story first appeared on LatestLY on Nov 21, 2022 11:04 PM IST. For more news and updates on politics, world, sports, entertainment and lifestyle, log on to our website latestly.com).