Durga Puja 2019: From Widows And Eunuchs Playing Sindoor Khela to Sex Workers Getting Their Own Pujo, Durga Puja Stands For Inclusivity

Maa Durga is in town and every Bengali is in the best of their spirits. Durga Puja for us is not just an occasion laced with rituals, but it signifies brotherhood, friendship and also an occasion of inclusivity. People across religion come together to welcome Maa Durga and soak in the fervour of the festival. 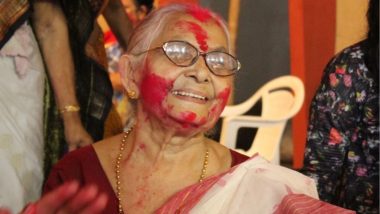 Kolkata, October 4: Maa Durga is in town and every Bengali is in the best of their spirits. Durga Puja for us is not just an occasion laced with rituals, but it signifies brotherhood, friendship and is also an occasion of inclusivity. People across religions come together to welcome Maa Durga and soak in the fervour of the festival.

According to mythology, it is believed that during Durga Puja, Goddess Durga comes to her parental house from the heavenly abode of Kailash. She is given the same treatment which a daughter gets when she visits her parental house. From new clothes to scrumptious feast, elaborate arrangements are made to give her a grand welcome. Durga Puja 2019: How Sonagachi Sex Workers Fought Their Way to Start Their Own Pujo And Are Celebrating With A Special Theme This Year.

It is during these days, that all the tension and worries take a backseat and people prioritise spreading joy. Right from the father who has saved money to buy his daughter new clothes and see her gleam with joy to the artisan waiting to see people bow in front of the idol which he shaped, moulded and has now been brought to life, it's festive everywhere.

Every pandal which you see out there has a beautiful story to narrate, the intricacies of the work reflect the amount of hard work which has gone into creating the fine piece of art in front of your eyes. The different innovative themes and the enthusiasm of the pandal hoppers who are ready to brace heat, rains, traffic and the unending queues just to get a glimpse of Maa Durga never fail to amaze us. This is what Durga puja is all about, where every person out there does their bit to welcome Maa Durga.

Not many are aware that Kolkata's famous red light area - Sonagachi - has its own Durga Puja and they have been celebrating it over the past couple of years. However, it was never an easy journey for the sex workers who have been arranging the Pujo. From fighting legal battles to having a puja in limited budget and space, they have fought hard just to celebrate Durga Puja.

For ages, it was the tradition to collect Punya Maati (blessed soil) from the backyards of a prostitute's house. However, in 2014, the women in Sonagachi refused to give soil to the artisans. Their demand from society was respect and to recognise their profession and not look down upon them as some piece of filth. The women even wanted to take part in the Durga Puja celebration, but the society shunned them from welcoming Durga. That is how they decided to have their own Durga Puja and celebrate the homecoming of Maa.

On the tenth day which is the final day of Durga Puja, there is an air of melancholy. Time has finally come to bid adieu to Uma as she is about to leave for her heavenly abode. In order to wish her a happy journey, she is fed with sweets and women play Sindoor Khela, a ritual played with vermillion.

Sindoor Khela originally was only about married women playing and taking part in bidding farewell to Maa Durga. However, today it is much more inclusive, thanks to progressive campaigns like #NoConditionsApply, which have opened a floodgate of conversations and helped break the age-old shackles. From widows and unmarried women to eunuchs and LGBTQI members, people come together to celebrate this ritual.

While tears roll by, we all chant 'Asche Bochor Abar Hobe', thereby, giving ourselves hope that it will happen again next year. Here's wishing everyone a very Happy Pujo.

(The above story first appeared on LatestLY on Oct 04, 2019 04:39 PM IST. For more news and updates on politics, world, sports, entertainment and lifestyle, log on to our website latestly.com).