The movement to free the state from the colonial rule had begun in the 19th century. After the liberation of the beach state, there was a controversy over it should be a separate territory or should be made a part of its neighbouring State. 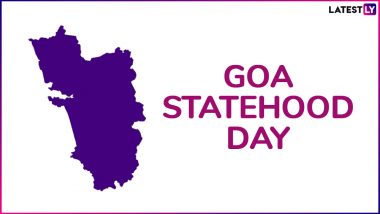 May 30 is a celebratory occasion for all Goans as it marks the Goa Statehood Day. It was on this day, in the year 1987 that Goa became the 25th state of the Indian Union. It is a day that looks at the achievements of the state to achieve the much-desired status. Although Goa was liberated from the Portuguese rule on 19 December 1961, it achieved statehood on May 30, 1987. Today marks the 32nd Statehood Day of Goa. Goa Liberation Day 2018: Know History of India's Beach Capital.

The movement to free the state from the colonial rule had begun in the 19th century. After the liberation of the beach state, there was a controversy over it should be a separate territory or should be made a part of its neighbouring State, Maharashtra or Mysore. An opinion poll was held in the year 1967 which opted for a separate entity but a status of Union Territory. But all the major parties opted for Statehood of Goa. The demand was raised in March 1971. The Congress introduced in the Lok Sabha a Bill demanding Statehood for Goa and in October 1976, along with Maharashtrawadi Gomantak Party moved a private member’s resolution in the Legislative Assembly also seeking Statehood. It was finally on May 30, 1987 it achieving the status of a separate state. It was no less than a dream come through for all the residents. On Goa Statehood Day 2019, people take to Twitter to wish each other. Politicians also shared their warm wishes with everyone.

Warm greetings and best wishes to the people of #Goa on the occasion of #GoaStatehoodDay. pic.twitter.com/xSXs2oYzRA

Greetings to the people of Goa on their Statehood day. May the little paradise, blessed with indescribable beauty, scale new heights of progress in the years to come. #GoaStatehoodDay pic.twitter.com/jszg41rTzh

Greetings to all Goans

Greetings to all my fellow Goans on Statehood day #May30 #GoaStatehoodDay 👍

My heartiest wishes to all my Goenkars on #GoaStatehoodDay. Let us continue to support each other and work towards becoming the developed and progressive state of our dreams.

As a proud Goenkar I will always honour and continue to work towards the prosperity of our state. pic.twitter.com/Gx6L6HJOhr

The Governor of the state Mridula Sinha also gave her heartfelt greetings on this day. The celebration of such days reminds the residents of its history, the progress over the years and how they should strive to do better for their state. This year everyone advocated to keep the state clean and contribute towards maintaining the cleanliness.

(The above story first appeared on LatestLY on May 30, 2019 11:21 AM IST. For more news and updates on politics, world, sports, entertainment and lifestyle, log on to our website latestly.com).