International Bat Appreciation Day 2021 Facts: Did You Know Bat Poops Sparkle? 7 Fun Things About the Misunderstood and Only Flying Mammal

On International Bat Appreciation Day 2021, we will learn more about why bats are so essential and the threats they are facing. Check out seven fun facts about bats you may not have known. 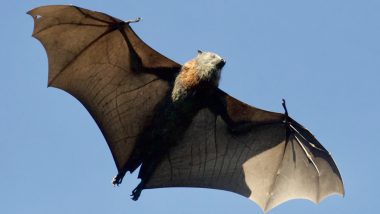 International Bat Appreciation Day 2021 is on April 17. Every year, the day is marked to honour bats species worldwide and create awareness about one of the most misunderstood but only flying mammals. Called creepy, scary and spooky, bats often get a bad rap. They are an essential species that impact our everyday lives in ways we may not have even realized. Frequently feared as sinister creatures of the night, bats are vital to the health of our environment and our economy. On International Bat Appreciation Day 2021, we will learn more about why bats are so essential and the threats they are facing. Check out seven fun facts about bats you may not have known.

1. Dogs aren’t the only ones with little pups! Did you know baby bats are also called pups? While bats only give birth to one baby per year, momma bats feed their pups breastmilk, just like other mammals.

2. By now, you must know that bats are the only flying mammal. But are you aware of another interesting fact that a bat’s wing resembles a modified human hand? Only the skin between fingers is larger, stretched and thinner. The flexible skin membrane that extends between each long finger bone and many movable joints make bats agile fliers.

3. Bats play an essential role in pest control. Studies estimate that bats eat enough pests to save more in crop damage and pesticide costs. Each night, the flying mammal can eat their body weight or more in insects, numbering in the thousands. This helps foresters and farmers protect their crops from pests.

4. Because bats eat so many insects, some bat poop sparkles. A rather weird fact, for sure! It happens as insect exoskeletons are made of shiny chitin; the excrement of some species in bats can be particularly reflective.

5. Over 300 species of fruit depend on bats for pollination. Bats help spread seeds for nuts, figs and cacao—the main ingredient in chocolate. The heroes of the night are also the sole pollinator for the agave plant, a key element in tequila!

6. Many medicines come from plants that rely on bats for their survival. Not only has that, studying how bats use echolocation helped scientists develop navigational aids for the blind.

7. Unfortunately, bats are declining across the globe. Many bats are killed because people do not understand or are quite aware of the important role bats play in a healthy ecosystem. Loss of habitat is another reason for the flying mammal’s decline. Another dire threat comes from white-nose syndrome, a disease that has decimated bats in the United States and Canada.

These are some fun, interesting and alarming facts about the flying mammal we must know to protect the species. So, spread the word, and promote a healthy environment.

(The above story first appeared on LatestLY on Apr 17, 2021 07:58 AM IST. For more news and updates on politics, world, sports, entertainment and lifestyle, log on to our website latestly.com).