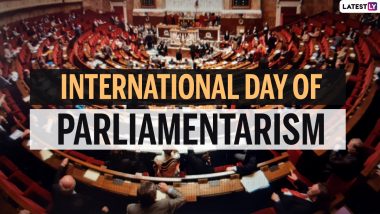 The day is particularly important at this critical time as people are losing belief in political institutions and democracy itself is facing challenges from nationalist and populist movements. "If democracy is to thrive, then parliaments, as the cornerstone of functioning democracies, need to be strong, transparent, accountable and representative," the UN says.

"The International Day of Parliamentarism is a time to review the progress that parliaments have made in achieving some key goals to be more representative and move with the times, including carrying out self-assessments, working to include more women and young MPs, and adapting to new technologies," it adds.

This year, the IPU will mark the day with several events focusing on youth empowerment following the recent launch of the campaign "I Say Yes to Youth in Parliament!" In 2021, the Day also marks the IPU's 132nd anniversary.

(The above story first appeared on LatestLY on Jun 30, 2021 08:09 AM IST. For more news and updates on politics, world, sports, entertainment and lifestyle, log on to our website latestly.com).