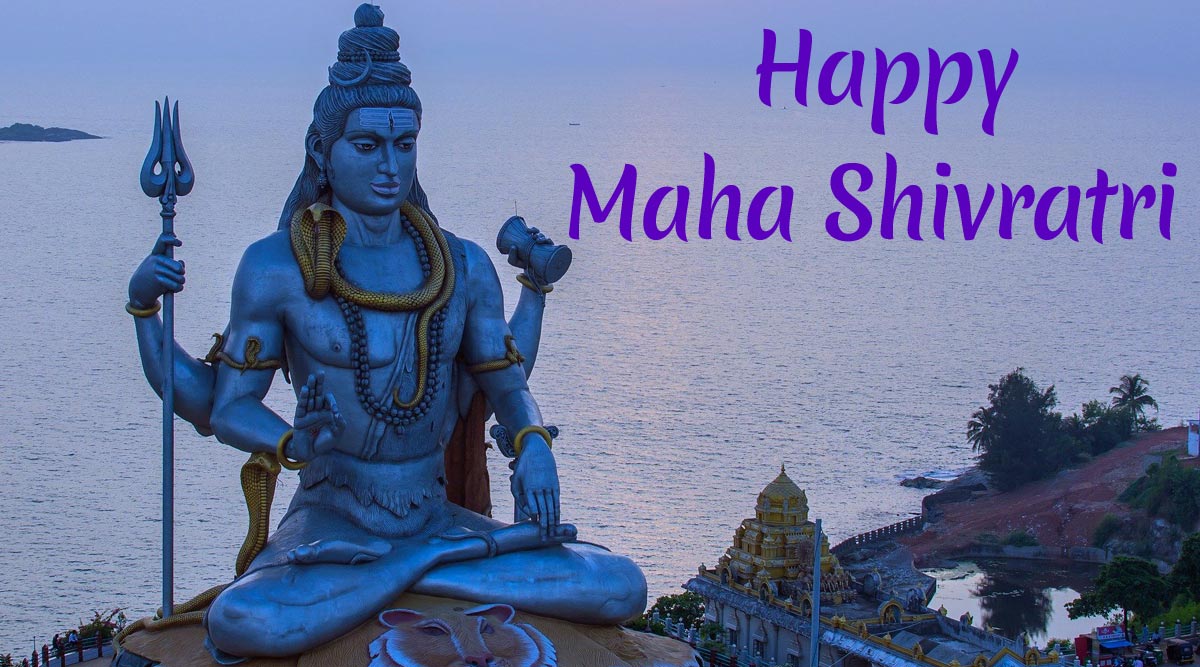 Happy Maha Shivratri 2020! One of the most auspicious days in the Hindu calendar is here. If you want to know when is Maha Shivratri celebrated this year then let us tell you that, 2020 celebrates Maha Shivaratri on Friday, February 21. While Chaturdashi falls every month in the Hindu Panchang and is considered to be Lord Shiva's day, but when Chaturdashi falls in the month of Falgun, the day becomes ten times holier and more auspicious. The day is celebrated as Mahashivratri. The Maha Shivratri Muhurat this year is said to begin in the evening of February 21 when Trayodashi Tithi ends at 5:20 and Chaturdashi Tithi begins. So, basically, Maha Shivratri is overlapping two days this year. Mahashivratri 2020 Date: Know Puja Vidhi, Maha Shivratri Shubh Muhurat, Significance and Legends Associated With the Festival of Lord Shiva.

As the name suggests, Maha Shivratri is the day of Lord Shiva also known as Shankar, Bholenath and Trinetra. But there is a special set of rituals aka puja vidhi that devotees must follow on this day to win lord shiva's heart. It is said that if you worship the right way on this day, good luck comes in your life and you may even receive Moksha or Nirvana. However, it is important to know just the right puja vidhi to worship lord shiva on this day. Let's help you with what you can do. Maha Shivratri 2020: Lord Shiva Bhajans And Shiv Tandav Stotram to Listen to And Share on The Auspicious Festival of Shankar Bhagwan.

On the day of Mahashivaratri, devotees start with bathing the Shivling with milk, curd, honey, ghee and sandalwood and also chant Om Namah Shivaya, the mantra for Lord Shankar. Apart from this, special leaves called Bel Patra are also offered to the Shivling aka the statue of Lord Shiva. It is believed that Lord Shiva loves milk and to keep his strong temper under control, milk is offered to his statue. On the occasion of Maha Shivaratri, ardent devotees of Lord Shiva also fast for the whole day, during which they refrain from eating meat and other forms of foods that are not falahar. They are only supposed to eat fruits, milk, curd and water. Some also observe Nirjala fast on Mahashivaratri which means they don't even drink a drop of water the whole day (Elderly, sick and pregnant women are advised not to fast).

Timing/Muhurat for Maha Shivratri fast: It is said that one must fast from the morning before the sun rises till night after the sunset.

Fasting Rituals: Resolution fasting with something that is called "Nitya Nyamayika Kriya Shauchadi". Basically, you make a resolution that you'll be fasting. Neet is Pooja havan where you lighten holy fire to make a resolution. After that Shiva Abhishek with milk and Bel Patra. Abatement of se. Sacrifice anger and complete dedication are a must.

Mantra For Fasting and Worship on Maha Shivratri: "Om Namah Shivaya". You can chant the mantra while meditation.

Why Is Maha Shivratri Celebrated

There are different ways legends have described why 'Mahashivratri' is celebrated. While some believe that on this day, Shiva and Parvati tied a knot while some saints believe that on this day, Shivji named 'Kalkoot', the poison he drank that came out of the sea at the time of Sagarmanthan. It is known that this Samudramanthan was done by the gods and asuras for the attainment of nectar. The story of a hunter is also associated with this festival. This legend is also mentioned in the mythological "Shiva Purana".

Devotees who fast on this day must read the Maha Shivratri Vrat Katha or the auspicious story mentioned in the legends to fulfil the fast completely. So here goes the famous vrat Katha. It all started back when there lived a Bheel in the forest of Varanasi whose name was Gurudruh. For a living, he used to hunt wild animals to raise his family. However, when on the day of Shivratri when he went hunting, he noticed that he did not get any animals to hunt at all.

A devastated Gurudruh climbed the tree by the lake thinking that animals that he would hunt the animals that would come to drink water.  The tree was said to be Bilvvriksha and a Shivling or Shiva statue was placed beneath.  Soon a deer came by to drink water and without giving any thoughts the hunter shot an arrow to kill it. This caused the leaves of the tree and the water fell on the Shivling unknowingly. Inadvertently, the Shivalinga was worshipped by him in the first hour of Shivratri. While the Deer also ran away, he unknowingly made Lord Shiva happy.

Soon he tried shooting another deer that came near the lake to drink water. This time in the second half of the night, the leaves and water of Bilvriksha fell on Shivling and the Shivling was worshipped once again. While this was for the second time the deer ran away as well, but he managed to worship Lord Shiva.  She also ran away. This whole thing happened for four times that day and the hunter remained hungry and thirsty throughout the day.  He unknowingly worshipped Lord Shiva fourth time while keeping a fast, thereby completing the fast of Shivaratri. The fast consumed his sins and he soon also abandoned the idea of ​​killing deer.

Finally, Lord Shankar appeared out of the Shivling and gave a boon to the hunter that in Tretayug, Lord Rama would come to his house and befriend him. Lord Shiva also said that he will get salvation. Ever since that time, the fast began to be observed every year by many devotees.