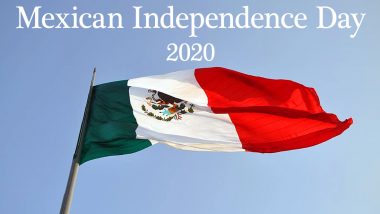 Mexico Independence Day or Grito de Dolores is celebrated to mark the anniversary of the country’s independence from Spain. The day is a national holiday in Mexico, celebrating the freedom which came after the revolt that began in September 1810. Various celebrations are held including a reenactment of a historic moment from the revolution’s leader, fireworks, dance routines and other performances. Mexico Independence Day 2020 falls on September 16.

A pivotal tradition of the holiday is honouring "El Grito de Dolores" known colloquially as "El Grito," the famous battle cry from September 1810 by Miguel Hidalgo that kicked off the War for Independence. Hidalgo, who resided in the city of Delores took up the banner of the Virgin of Guadalupe, Mexico's patron saint thus inspiring many to follow him and join hands in his fight for independence.

Independence Day in Mexico is celebrated with street parties, parades, fireworks, brass band, mariachi performances and traditional folk dancing in the streets. A military march up to the memorial of Hidalgo is also held on this day. On the evening of September 15, the Mexican president recreates "El Grito" in front of a crowd of hundreds of thousands from the balcony of the National Palace. The audience shouts "Viva!" after each line during the performance. It culminates in the president ringing a bell as another tribute to Hidalgo.

Foods that are traditionally made for Mexican Independence Day include pozole, menudo (a beef stew known as a hangover cure), birria de borrego (spiced lamb) and queso fundido. Tequila is the beverage of choice on the day. Chiles En Nogada is also frequently eaten on Mexican Independence Day, as the colours of the food - cream sauce, parsley, and poblano chiles - makes it look like the Mexican flag.

Non-Mexicans frequently confuse the observance with Cinco de Mayo, which is celebrated widely in the United States which commemorates the Battle of Puebla. Other than Mexico, Independence Day is widely celebrated, with parades and festivals in Mexican cities like Los Angeles, Houston and New York.

(The above story first appeared on LatestLY on Sep 16, 2020 09:00 AM IST. For more news and updates on politics, world, sports, entertainment and lifestyle, log on to our website latestly.com).