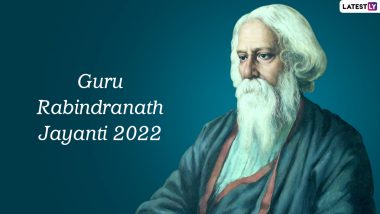 Gurudev Rabindranath Tagore was a pioneer in Bengali literature, and he is celebrated as a great poet, novelist, scholar, playwright, philosopher and Nobel Laureate. Rabindranath Tagore Jayanti marks the birth anniversary of the Bengali polymath on May 7. And then there's Rabindra Jayanti, a cultural festival, popular among Tagorephiles around the world. It is observed according to the Bengali calendar and on the 25th day of Boishakh month. This day celebrates Tagore’s trailblazing achievement and extraordinary body of work. Everything you need to know about Rabindranath Tagore Jayanti, from date and significance to the History of this day. May 2022 Holidays Calendar With Major Festivals & Events: Check Date Sheet of All Important Dates And Indian Bank Holidays for The Month.

This day celebrates the birth of Rabindranath Tagore, who changed the landscape of Bengali literature and music and was a pioneer leading literature into modernism. Born into an affluent Brahmin family in Calcutta, and was the youngest of all siblings. Since he was little, Tagore was the master of many talents; his curiosity knew no bounds. He was a trailblazer in leading literature and combing notes of modernism and the new world in his works.

He is regarded as one of the most influential and critically acclaimed writers, poets and novelists. Some of his most notable works include Gitanjali, Post Master, Kabuliwallah, and Nastanirh, to name a few. His significant works include short stories, essays and songs, which have inspired many other famous works, and these short stories and songs are generally referred to as Rabindra Sangeet. Tagore was awarded the Nobel Prize in 1913 for his contribution to the world of literature, and he was the first non-European to do so.

Rabindranath Tagore composed the national anthem ‘Jana Gana Mana’, which remains one of his most notable works. Tagore also founded the Vishva Bharti University in Santiniketan, West Bengal. His impact on the literature and art worlds has inspired many others to follow their passions in the field of art. His songs and stories are still recreated for the new generation to learn of his exquisite body of work.

Rabindranath Tagore Jayanti is celebrated in West Bengal with vigour and grandeur; there are fests and events dedicated to his works, poetry readings and screening of movies based on his novels. Multiple events also occur in Tagore’s place of birth in Jorasanko Thakur Bari. Bengali communities worldwide organise cultural programmes, and people remember the legendary work of Guru Rabindranath Tagore.

(The above story first appeared on LatestLY on May 05, 2022 03:51 PM IST. For more news and updates on politics, world, sports, entertainment and lifestyle, log on to our website latestly.com).