Thrissur Pooram 2021 to Be Held on April 23 Despite a Staggering Spike in COVID-19 Cases! Netizens Go Berserk

Thrissur Pooram 2021 is set to be held on April 23 despite the staggering spike in COCID-19 cases in the state of Kerala and the rest of India. The country is crippling with a massive second wave of coronavirus that caused the numbers of coronavirus patients to increase dramatically in the past few weeks. 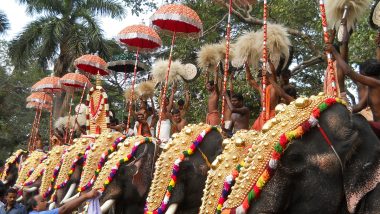 Thrissur Pooram 2021 to be held on April 23 (Photo Credits: WikiCommon)

Thrissur Pooram 2021 is set to be held on April 23 despite the staggering spike in COCID-19 cases in the state of Kerala and the rest of India. The country is crippling with a massive second wave of coronavirus that caused the numbers of coronavirus patients to increase dramatically in the past few weeks. Thrissur Pooram is one of the most popular festivals of India, celebrated predominantly in Kerala.

Thrissur Pooram is an annual Hindu festival held in the state of Kerala, India.

It is held every year at Thrissur's Vadakkunnathan Temple on the day of Pooram (Pooram according to the Malayalam calendar is the day when the moon rises along with the Pooram star in the month of Medam). It is the largest and most famous of all Pooram. The day sees a large number of people gather to offer prayers, which in the current condition can turn into a major COVID-19 hotspot. BUT Kerala govt. still believes that the festival must be celebrated in the same way on April 23.

The tradition of celebrating this festival was first started by Raja Ram Varma, Maharaja of Cochin. Raja Ram Varma was also known as Sakthan Tampuran. Officially the beginning of Pooram begins with the Kodiyattam or flag hoisting ceremony in which all of the festival People from the participating temples are present in Pooram and there are 10 temples in Thrissur and this is a ceremony in which all the gods together worship Lord Shiva at the Vadakkunnathan temple in the middle of the city. The most special thing about the festival is the traditional shock. The gathering of musical instruments which includes instruments such as Cheda, Madlam, Idika, Timla, and Kombu is known as Pakal Param on the last 7 days of Pooram, although Pooram is a Hindu festival it has given the logo of all religions present in Kerala Has taken under its influence, people of both Muslim and Christian communities join this festival, which shows the religious harmony spread in the state, elephant procession in Thrissur is the centre of attraction for everyone to see besides India. Tourists from all over the world come

No doubt a congregation like #thrissurpooram is completely avoidable as Kerala is staring at 17% positivity rate. @vijayanpinarayi Sir, @shailajateacher, please ensure it doesn't take place. Malayalis can live without it. We've suffered enough with floods and diseases.— V (@ivivek_nambiar) April 18, 2021

Just don't allow people in. How hard is it? If they can do that for the bloody IPL, they can surely do it for #ThrissurPooram https://t.co/kW4eOCOiBb— Vishnu Prasad (@visheprasad) April 17, 2021

Before the beginning of Thrissur Pooram, the largest temple festival in Kerala was a one-day festival held at Arattupuzha (Aarattupuzha) known as Arattupuzha Pooram. The main temples of Thrissur such as the Paramekkavu Devi temple and Thiruvambadi Sri Krishna (Thiruvambadi Sri Krishna) temple have to show their reverence to Lord Shiva. Both the above temples oppose each other during the festival and their 'team of elephants' compete with each other on the sixth day through elephant procession, fireworks and overall cultural representation.

(The above story first appeared on LatestLY on Apr 19, 2021 10:43 AM IST. For more news and updates on politics, world, sports, entertainment and lifestyle, log on to our website latestly.com).