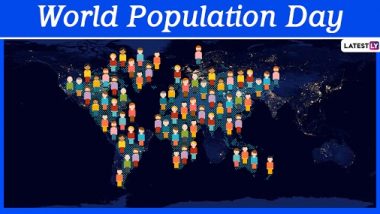 Every year, the World Population Day is observed on July 11. It is an annual event which seeks to raise awareness of global population issues such as the importance of family planning, gender equality, poverty, maternal health and human rights. This year, the World Population Day calls for global attention to the unfinished business of the 1994 International Conference on Population and Development. 25 years have passed since that landmark conference, where 179 governments recognized that reproductive health and gender equality are essential for achieving sustainable development.

As per the current demographics, the world population is over 7.8 billion so far this year. The global population was estimated to have reached 7.8 billion people as of March 2020. Reports claim that it took over 200,000 years of human history for the world's population to reach 1 billion, and only 200 years more to reach 7 billion.

The day was suggested by Dr. K.C.Zachariah in which population reaches Five Billion when he worked as Sr Demographer at World Bank. The event was established by the Governing Council of the United Nations Development Programme in 1989. It was inspired by the public interest in Five Billion Day on July 11, 1987, the approximate date on which the world's population reached five billion people. World Population Day aims to increase people's awareness on various population issues such as the importance of family planning, gender equality, poverty, maternal health and human rights.

The theme of World Population Day 2020 is aimed on safeguarding the health and rights of women and girls across the globe especially at the time when nations of the world are grappling under the COVID-19 pandemic.

On this day, advocates from around the world are calling on leaders, policymakers, grassroots organizers, institutions and others to help make reproductive health and rights a reality for all. International days are occasions to educate the public on issues of concern to address global problems, and to celebrate and reinforce achievements of humanity.

In November, UNFPA, together with the governments of Kenya and Denmark, will be convening a high-level conference in Nairobi to accelerate efforts to achieve these unmet goals. The World Population Day is a good reminder to step outside ourselves and focus on the important issues that influence how people live now and what efforts will be needed to slow population growth.

(The above story first appeared on LatestLY on Jul 09, 2020 08:47 PM IST. For more news and updates on politics, world, sports, entertainment and lifestyle, log on to our website latestly.com).