The scientists who conducted this study found out that every sample had some hazardous bacteria, out of which nearly half of them were hazardous to human health. 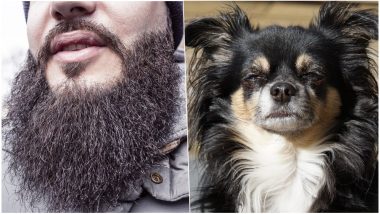 Clean shaven or bearded look is a question that many men keep wondering about. But a new study might want them to be clean-shaven over sporting a beard. Men with a beard have to be extremely careful to maintain it. But a new study claims that beards carry more germs in their whiskers than on a dog's fur. The scientists who conducted this study found out that every sample had some hazardous bacteria, out of which nearly half of them were hazardous to human health. In comparison, the dogs that were tested had lesser microbes. But this has irked men who love their beards and have called it a result of pogonophobia – the irrational fear of beards. Men with Beard and Long Hair Have the Smallest Testicles! And the Reason is Shocking.

For this study scientists took samples from beards of 18 men and also hair of 30 dogs, from a range of breeds. In comparison, they found that beards had way more bacteria compared to the fur of the dogs. Professor Andreas Gutzeit, of Switzerland's Hirslanden Clinic was quoted to Daily Mail, "Dogs can be considered as clean compared with bearded men." The bearded men were from the range of 18-76 years and most of them had higher microbial counts. Seven of the men had microbes that posed a threat to human health. Beard Bouquets: Men Handsomely Sporting Flowers in Their Beard is One Fun Fashion Trend.

The aim of this study was to find out the risk of humans picking up a disease from dogs if they used the same MRI scanner. On disinfecting the MRI they found, there were more bacteria on it after the men used it. But this study hasn't pleased the beard keepers and lovers. Keith Flett, founder of the Beard Liberation Front stated that he doesn't find beards as unhygienic. "There seems to be a constant stream of negative stories about beards that suggest it's more about pogonophobia than anything else," he said. Well, the findings do seem shocking and those who love beards may not agree.

(The above story first appeared on LatestLY on Apr 15, 2019 09:27 AM IST. For more news and updates on politics, world, sports, entertainment and lifestyle, log on to our website latestly.com).