Pur3taha From Benghazi to Hollywood: Son of Immigrants Making Wave as a Fashion Designer and Entrepreneur

It’s clear that Taha takes great pride in the success his newest venture has had in spite of the pandemic. “At PUR3, we make your vision come to life. I’m all about making people’s vision become a reality.” It’s not surprising to hear him say this, since he’s already experienced what manifesting a dream feels like. 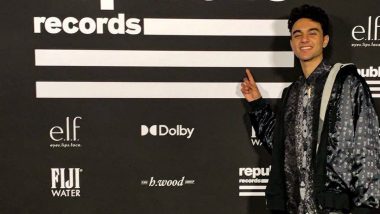 In just a few short years of working in the fashion industry, Taha Elghanai has already caught the eye of multiple A-list celebrities, even before moving to LA in January 2020. Relocating to a city of such magnitude is bold move, even for those who may be moving there from a different metropolis.

It isn’t for the faint of heart. However, for young creatives and entrepreneurs, LA is a city overflowing with opportunities to grow, network, and find endless inspiration. For Taha, who’s fashion brand PocketStar was already making waves in the music scene, moving to the hub of the entertainment industry made sense despite the uncertainty that comes with such a move.

In all honesty, it may have seemed less daunting to him when one considers the wide variety of experiences, he has already had despite being only 21. The son of Libyan immigrants, his childhood years were divided between Everett, Washington and Benghazi.

In Libya, he saw firsthand the effects of constant tension that has become a tragic norm in the region and witnessed large portions of a city with centuries of history reduced to rubble. Living in Washington came with its own set of challenges; from assimilating to a different culture while still preserving his Arab roots and Muslim faith, to watching his parents struggle to get their feet under them as they began a new life.

“Growing up, my family didn’t have much,” he reflects, “just food on the table and shopping for clothes once a year.” This reality gave Taha a drive to be successful at an early age. It also became apparent at an early age that he had a strong creative streak and was already harboring reservations about taking the traditional college route to find a career well before his senior year of high school. “I knew a normal job wasn’t going to work for me even when back when I was in school, I was always sure of that. I was tired of seeing my family struggle, and I was always very ambitious growing up. The only thing I wasn’t sure about was exactly what I was going to build.”

Taha says the answer was revealed to him in 2017 when he was still in high school. “I’ve always been a music lover. I love music, live concerts, the way music creates culture and trends. I’d go to concerts and see the biggest artists in Seattle whenever I could. I’ve always had a love for fashion, too. So I’d go to these concerts, and at some point I realized that I’d go to the merch tables after the show was over and look at the shirts and stuff they were selling and thinking the stuff didn’t really look that cool. Like anybody could have designed that. That’s when it came to me: start your own merch brand. A little while later the PocketStar idea came to me.”

Once he saw the vision, Taha went right to work. He picked up a dishwashing job, working during the day to save up the money needed to start his company, and creating product designs at night when he got home.

The concept was simple, plain t-shirts with a breast pocket, and an animated face of a famous rapper printed on the pocket. Taha ordered the shirts and drew the faces of artists like Drake, Travis Scott, and Kanye West, printing the designs onto the shirts himself. He began selling them locally, and PocketStar was born. “At first it was just word of mouth,” Taha says, “I started pitching the shirt around town and to my friends and stuff and eventually people I didn’t know were hitting me up for them. That’s when I knew it could really work.”

The initial success convinced Taha to go all in. He had started taking classes at the Art Institute of Seattle while he was working his job and starting his brand. But when the school announced it would be permanently closing their doors, instead of transferring to a different school, Taha chose to accept the refund and put it into PocketStar. He began looking for ways to grow awareness for PocketStar and take it into the mainstream.

A big break came not long after. “I knew celebrity endorsements could be a good way to grow my platform, so I started branching out into the underground scene. I ended up going to an XXXTentacion concert with the X PocketStar shirt I had designed and having his DJ show him the shirt. X ended up wearing the shirt with his face on it and endorsing the brand.”

This moment would prove to be the big break for Taha and PocketStar, as XXXTentacion not only endorsed the brand, but made a deal with Taha so that he could make the X PocketStar t-shirt part of his official tour merchandise. “After X showed love and brought the shirt on tour, it made PocketStar legit, and things started moving really fast after that.”

Other big artists soon followed. Tory Lanez endorsed the brand as well as other artists, including Playboi Carti and Smokepurpp. In 2018, Post Malone endorsed the brand and made the Posty PocketStar line part of the official merch fleet for his Runaway Tour, which became the highest grossing tour of 2019. Now that he was fully established, Taha made the decision to move permanently to LA.

Soon after though, COVID-19 hit the U.S., and like many, Taha had to adjust accordingly. With tour sales being the main source of revenue for PocketStar, Taha had to find other ways to apply his design and business savvy. It turned out to be a blessing in disguise, and a great opportunity for growth. “I figured that if I was able to create my own brand from scratch and by myself then I could do the same for other people.”

With that realization, Taha began to change his focus. He began working closely with LA rap duo WAV3POP, who were among the first friends he made when he moved to LA and helped them start their ONWAV3 clothing line. He handed over a majority of PocketStar’s maintenance duties to his younger brother Modey, another rising entrepreneur, and started the PUR3 Branding company, which provides brand development, product design, and merch production services for people looking to start their own product lines.

It’s clear that Taha takes great pride in the success his newest venture has had in spite of the pandemic. “At PUR3, we make your vision come to life. I’m all about making people’s vision become a reality.” It’s not surprising to hear him say this, since he’s already experienced what manifesting a dream feels like.

It’s also given him a drive to deliver high quality service and not cut corners, which is evident by the hours and attention to detail he dedicates to every client. While he has far more resources at his disposal now compared to when he was starting PocketStar, Taha puts just as much effort into the brands he currently developing as he did with PocketStar back in 2017, still overseeing every step of the development process personally. “I go from designing the fashion product, overseeing it being handmade here in LA, to building the websites and running the marketing campaigns. We run a full operation in-house for all your manufacturing needs, cut and sew the products, sublimation and everything else.”

While Taha gets a clear sense of satisfaction from going into detail about the work he puts in, as well as the results, he exudes confidence rather than coming off as cocky; and with how well his company has performed, he’s certainly earned the right to enjoy the success. So far, in 2021, PUR3 Branding has developed 18+ brands and counting, and Taha’s name is quickly spreading throughout the fashion industry as the go-to guy to get branded the right way.

While he loves to speak on his success and reference himself as proof of what can happen when creativity is combined with hard work, Taha hasn’t “gone Hollywood” or forgotten his roots.

Despite all the demands he has to meet on a daily basis and being immersed in the largely secular and celebrity-filled LA scene, he still adheres to his Muslim faith and is currently observing the month of Ramadan, fasting from all food and water from sunrise to sunset, while still maintaining the same level of productivity.

He credits his upbringing and not losing sight of his core beliefs for his success as much as his own drive and work ethic. He’s grateful for the lifestyle he gets to live. “I dreamed big from the start. I saw it back when I was washing dishes, now I’ve worked with over a hundred celebrities. Post Malone, NLE Choppa, Trippie Redd etc. Don’t limit your success. Believe in yourself, I did.” While Taha continues to dream, he also wants his story to inspire others to chase theirs.

“No matter who or what tells you that you can’t do something, if you can see yourself doing it then you’re going to do it. I went from being broke and washing dishes to making more money than I ever imagined. And not just the money, the lifestyle I get to live. I get to work with my favorite artists and celebrities as well as financially provide for myself. I get to use my creativity to help others grow their brands and manifest their dreams like I have. Don’t sleep on yourself, you can do anything.”