The group was signed to Sleeping Bag Records in 1988 with Mikey D’s battle rap ability setting him apart to the point where he entered into the 1988 New Music Seminar Battle for World Supremacy, which he won. He became the best rapper in the world due to his win and earned bragging rights for that year. 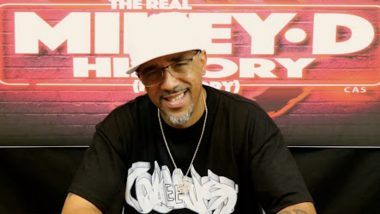 Hip-hop has come a long way with many pioneers and establishing artists. Some got duly recognized, while many didn’t and unfortunately have no place in the history books. Mikey D is an hip-hop artist who has earned legendary status from the ’80s and is all out to stamp his presence in the new evolving world of Hip-hop where everything has changed and become new.

Mikey D hails from Queens, New York, and was raised in Laurelton, Queens; so hip-hop runs through his veins and arteries. His journey began with his friend and neighbor, D Money, playing a cassette tape that featured Grandmaster Caz (Cold Crush 4), and Kool Moe Dee (Treacherous 3). Mikey started his career somewhere between 1979 and 1981 performing with local crews like The Grandmaster 3, L.A. Rap Masters, Phenomenal 4, Money Making 3, and The Sensational 5. He joined an established group called The Clientele Brothers and became the youngest member of the group.

Thriving under the guidance and mentor shop of Eddie Ojay and Will Seville, Mikey developed his own style and cadence, which he credited to his two mentors. In 1985, Mikey and his day one friend, Johnnie Quest met an upcoming producer and engineer, Paul McKasty aka Paul C, with whom they formed the group Mikey D & The LA Posse. Together as a group, they recorded and released their first single titled “My Telephone” in 1987, and it was backed with “Bust A Rhyme Mike,” “Dawn” featuring Rahzel. Later that year, they released “I Get Rough,” and backed it with “Go For It,” which were both released by Public Records Label. The group was signed to Sleeping Bag Records in 1988 with Mikey D’s battle rap ability setting him apart to the point where he entered into the 1988 New Music Seminar Battle for World Supremacy, which he won. He became the best rapper in the world due to his win and earned bragging rights for that year.

Mikey D and his group released more songs like “Out of Control” backed with “Coming In The House,” before Mikey joined another hip-hop group called Main Source in 1993. They released hit single “What You Need,” which got them a place on the classic show Soul Train and also writing credits on Madonna’s “Human Nature” due to the fact that the superstar sampled the song on her album Bedtime Stories.

Mikey D’s world traversed many generations, and many new rappers have adopted the name “Mikey D” without paying homage to the original owner of the name. This has, therefore, necessitated the upcoming documentary where Mikey D hopes to tell his real story as the Real Mikey D. Titled The Real Mikey D Story (His-Story), this is geared towards showing a side of him that many people don’t know about him. He also established his company, Pass The Torch Distribution with his co-worker, Calvin Smith, aka Cal Cutter to shake things up in the music scene.

The Real Mikey D History (His-Story) is set to be the first documentary series of its kind. Mikey will be taking viewers on a journey of his extensive career, including all the people who were a part of his journey. The show will be aired on  Apple TV, ROKU, The Who? Mag Multimedia mobile app, and on WHO?MAGTV.com. The special guests range from Mikey’s friends, and family, to some of hip-hop’s most recognizable faces. It’s a series that promises to be inspiring, informative, and enjoyable.