Hina Khan is said to be holidaying in Maldives with her boyfriend Rocky Jaiswal and her parents. She is amongst the many celebrities who flew down to the island nation post the lockdown for a relaxing time. Days before her respite, Hina was a part of Bigg Boss 14. 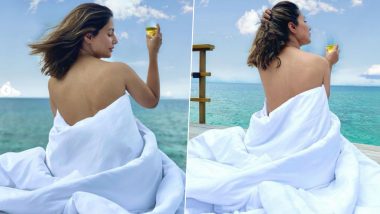 Hina Khan has been treating her fans with exotic pictures from her Maldives vacation. The actress who flew down to the beautiful holiday destination a few days back has been posting gorgeous pictures in bikinis and kaftans for her fans to see. It was only yesterday when the actress shared a picture in a lavender bikini as she soaked the Maldivian sun. The picture went viral in no time and set the internet on fire. But as the days pass and Hina spends more time in Maldives, her pictures just get better and better. Hina Khan Soaks the Maldivian Sun As She Relaxes on the Beach in a Lavender Bikini.

The actress shared a few more pictures from the beautiful location as she enjoyed the blue waters of Maldives. The actress is flaunting her sexy back in these pictures as she wrapped herself in a white blanket! The Hacked actress has a glass in her hand as well. While Hina's pose is as Bollywood it can get, her stunning looks made the pictures look amazing!

Hina is seen playing with her hair in one photo while in another we see her boasting her side profile. Hina looks extremely happy and relaxed as she enjoys the mild breeze. What makes the picture even more beautiful is the picturesque background displaying a blue sky full of clouds. Hina Khan Looks Breathtakingly Beautiful in Her Polka Dot Bikini Paired With A Breezy Shrug!

Check Out The Picture Here:

Hina Khan is said to be holidaying in Maldives with her boyfriend Rocky Jaiswal and her parents. She is amongst the many celebrities who flew down to the island nation post the lockdown for a relaxing time. Celebrities including Tara Sutaria and boyfriend Aadar Jain, Tiger Shroff and Disha Patani, Taapsee Pannu with sister, cousin and boyfriend, Katrina Kaif have already been spotted vacationing in Maldives.

Days before her respite, Hina had entered the Bigg Boss 14 as a senior along with Sidharth Shukla and Gauahar Khan. She was also seen in Naagin 5 and in a web-series titled Damaged 2. Her music video Humko Tum Mil Gaye also released recently and received a massive amount of love from the fans. She was also awarded the Style Icon of Television Industry 2020 (female) and Style Icon of Social Media 2020 (female) awards. Hina also won a prize at the Dadasaheb Phalke Icon Awards Films 2020.

(The above story first appeared on LatestLY on Dec 06, 2020 01:05 PM IST. For more news and updates on politics, world, sports, entertainment and lifestyle, log on to our website latestly.com).