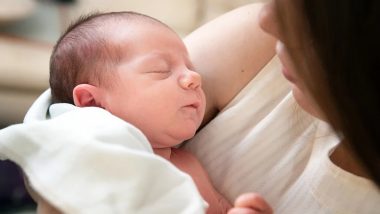 Tina and Ben Gibson from Tennessee have been blessed with a baby girl from an embryo that was frozen 27 years ago. Molly Everette Gibson was born on October 26 from an embryo that was frozen in 1992. And now the newborn has made history by being born from the longest-frozen embryo known to result in a live birth, according to researchers at the University of Tennessee Preston Medical Library. Also, it has broken the previous record held by her sister, Emma Wren, who was born from an embryo frozen for 24 years. She was born in November 2017. The embryos were frozen together and are full genetic siblings. Lesbian Couple ‘Give Birth’ To The Same Baby! US Women Take Turns To Carry The Child In Their Wombs.

Tina and Ben Gibson became parents through a process called embryo adoption. It happened with the help of the National Embryo Donation Center (NEDC), a nonprofit organisation in that store frozen embryos. The organisation has facilitated over 1,000 births through embryo adoption, with embryos that come at the clinic from across the country. Baby Inside a Baby? Indian Infant Born With Sister Inside Her Stomach In a Condition Called Fetus in Fetu.

Tina told The NY Post, "It’s hard to wrap your head around it. But, as far as we’re concerned, Molly is our little miracle." The embryos thawed nearly three years apart at the NEDC before their respective transfers into Tina’s uterus. Carol Sommerfelt, NEDC's director, was quoted by CNN as saying, "This definitely reflects on the technology used all those years ago and its ability to preserve the embryos for future use under an indefinite time frame." She further said, "It is very rewarding for me to see an embryo that was frozen years ago result in the birth of a lovely baby. I feel honoured to be part of the process."

(The above story first appeared on LatestLY on Dec 02, 2020 09:48 PM IST. For more news and updates on politics, world, sports, entertainment and lifestyle, log on to our website latestly.com).