Baby Inside a Baby? Indian Infant Born With Sister Inside Her Stomach In a Condition Called Fetus in Fetu

The infant was born with a distended stomach, which was later revealed to be her 1.1 pounds twin sister. 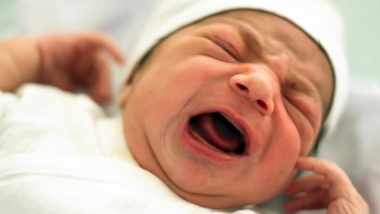 A baby born in India with her twin sister inside her had her dead sibling removed in a one-and-a-half-hour surgery. The condition known as fetus in fetu is medical aberration where one twin gets embedded inside its sibling while they are still in the mother’s womb. The condition is seen in every one of 500,000 births. The child was operated upon by a team of doctors who detected the abnormality in the nick of time.

The infant was born with a distended stomach, which was later revealed to be her 1.1 pounds twin sister. At first, the doctors didn’t detect anything abnormal. But the child had to be readmitted to Sir Sundarlal Hospital after suffering from recurrent colds and stomach aches. Tests helped determine the nature of the child’s problem.

The surgeons successfully extracted the underdeveloped embryo, which was a large mass with hands, legs, stomach, chest and a spinal cord, from the baby’s body. The unnamed child was born to a couple in Bhakrodh Sherwan in northern India and has been discharged after the operation. Foetus Removed From A 20-Day-Old Baby’s Stomach! What is Fetus in Fetu?

What Fetus in Fetu?

Fetus in fetu is a rare medical condition, where one of the twin siblings gets embedded in the body of the other. The term literally means “foetus inside a foetus.” Such foetuses are generally found lodged inside the retroperitoneal area or behind the abdominal cavity. In many cases, the abnormality is detected only in the later stages of the child’s life.

It’s so rare that so far, fewer than 200 cases of fetus in fetu has been reported. The twin enclosed inside its sibling’s body can sometimes turn parasitic by feeding off on its nutrition.

Normally, such foetuses are underdeveloped masses with vertebrae. But sometimes, they can develop skin structures, parts of the digestive system and the central nervous system. In rare cases, gonads, adrenal glands, heart, pancreas, spleen and respiratory system can also be seen.

(The above story first appeared on LatestLY on Jan 04, 2019 06:27 PM IST. For more news and updates on politics, world, sports, entertainment and lifestyle, log on to our website latestly.com).