Bella Thorne Shares Nude Pics to Beat Hacker to It, Shocked That Women Didn’t Support Her

Bella Thorne has taken back the power over her pictures but doesn't get the support she expected. 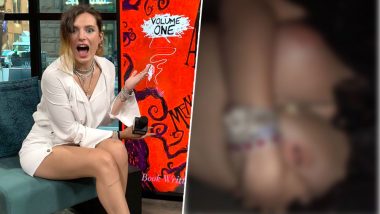 While Bella Thorne was busy with her book The Life of a Wannabe Mogul: Mental Disarray, her twitter was hacked. The hacker started off with a trail of strange tweets, including tweets about Bella being involved with rapper, Drake. Racial slurs were thrown around in her tweets. The hacker then tweeted about leaking Bella’s nudes to the public. However, Bella took control over the hacker situation the moment she got access over her social media. Bella Thorne Posts Her Nude Photos On Twitter After A Hacker Threatens Her To Share Them.

Disney actress, Bella Thorne, was recently in trouble when her twitter account was hacked. On Saturday, when Bella Thorne gained control over her twitter account, she got back at her hacker by posting the nudes she was threatened with. She added screenshots of the messages from the hacker and their conversation. She also added a note along with the pictures and screenshots. Bella posted a note saying she “fucking sick” of letting a man take advantage of her. Bella was praised by many but there were quite a few who criticised her move.

Fuck u and the power u think you have over me. I’m gonna write about this in my next book😡😡😡 pic.twitter.com/0Ep0iXgW51

While, some people called Bella brave for not hesitating and posting her nudes, showing she is the only one who can make decisions for her body. Bella has complained about some people criticising her for her solution to the blackmail and threats. She uploaded two small clips to her Instagram story saying she isn’t getting any support from women. Bella expressed how shocked she is to see girls not supporting her. She seems upset over the whole “girls not supporting each other” thing. Hollywood Actress Bella Thorne Says, Coming Out as Bisexual Made Me Lose Auditions

Bella hasn’t reported the hacker yet saying he seems like a minor and does not understand anything. The hacker has also sent nudes of other celebrities to Bella showing her he can do a lot more damage. The audience is divided into thinking she’s dumb to not report a crime, while some call her smart to plot everything around her book launch. Whichever it may be, kudos to Bella for being so fearless!

(The above story first appeared on LatestLY on Jun 18, 2019 04:46 PM IST. For more news and updates on politics, world, sports, entertainment and lifestyle, log on to our website latestly.com).