We commend Bella for giving a befitting reply to the alleged hacker, who blackmailed her on Twitter 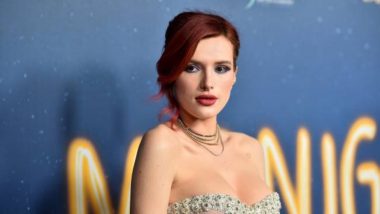 Bella had a powerful reply to the alleged hacker, who threatened her on Twitter

Talk about giving it back to the bullies. Bella Thorne refused to be bullied by an alleged hacker as the actress posted nude pictures of herself after getting threatened on Twitter. Bella posted screenshots of text message conversations with the hacker, who said he had nude pictures and videos of her. "For the last 24 hours I have been threatened with my own nudes," the 21-year-old actress, model and singer wrote in a note posted on Twitter alongside the screenshots. "I feel gross. I feel watched, I feel someone has taken something from me that I only wanted one special person to see," she added.

In the same note, Bella also revealed the reason behind posting the screenshots. She said she was releasing the pictures because "it's MY DECISION" and "NOW U DON'T GET TO TAKE YET ANOTHER THING FROM ME. I can sleep tonight better knowing I took my power back." She concluded the message by adding, "U can't control my life u never will." Bella Thorne to Star in Horror Sci-Fi Titled Friendship Game.

According to CNN, they called the phone number of the alleged hacker, which appeared in the screenshots, but they did not hear back. Bella's Twitter account, which has more than 6.6 million followers was apparently hacked on Thursday. A number of racist tweets were posted to the account. Not just that, the profile picture was also changed to a man. As of now, the tweets have been deleted and the picture has been changed too.

What are u worthy of? What are u not worthy for? I just wanna look in the mirror and learn how to love me. #thelifeofawannabemogul Directing by @kandikamerugh LINK IN MY BIO

Bella is not the only female celebrity to have her privacy violated as a result of hacking. A few years back, number of famous women including Jennifer Lawrence, Aubrey Plaza and Kate Upton had their private photos hacked and leaked online.

Last year, Bella revealed she was physically and sexually abused as a child. We commend Bella for giving a befitting reply to the hacker.

(The above story first appeared on LatestLY on Jun 17, 2019 05:11 AM IST. For more news and updates on politics, world, sports, entertainment and lifestyle, log on to our website latestly.com).