Black Friday 2019 Fights! Videos of Brawls Among Shoppers Surface Online And Netizens Are Up For The 'Entertainment'

Instances of customers getting into fights and brawls have become very common and this year too, there were cases of serious fights among shoppers. Videos of Black Friday fights from different parts of the world have been shared on social media. 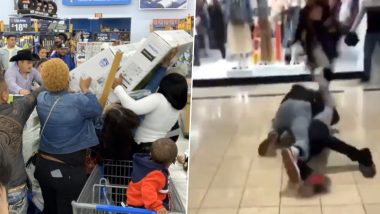 A day after Thanksgiving, November 29 marked the celebration of every shopper's delight - The Black Friday. When almost every store gives away great discounts and deals, it is a day looked forward to all year round by shoppers. But the overwhelming crowds lining up to grab the best of deals often end up causing more damage than good. Instances of customers getting into fights and brawls have become very common and this year too, there were cases of serious fights among shoppers. Videos of Black Friday fights from different parts of the world have been shared on social media. And while, the fights are pretty serious, netizens seem to be just enjoying the show. Black Friday 2019 Memes and Jokes: LOL at These Funny Memes While You Stand In Queue to Buy The Discounted Blender You Don’t Need.

Jokes about fights at the Balck Friday sales had started surfacing before the Thanksgiving day. Year after year, it is common to see shoppers get into a brawl to grab the best deals to themselves. With huge crowds coming in to make the most of the sales, there is a chaotic situation in most of the places. Black Friday 2019 also saw a share of the fights among customers in Virginia, North Carolina, Pennsylvania. Videos of some of these fights have made their way on to social media.

Scuffle Between Two Men in Pennsylvania

It is not clear if this was related to a sale offer but the two men got into a serious scuffle outside the Forever 21 outlet at the Lehigh Valley Mall in Whitehall.

Can you see the tensions here? The fight could've grown into something bigger but thankfully, it was got under control.

Someone Even Decided to Take Selfies With Fights!

Some People Were Clearly Waiting for Entertainment

Me waiting for those Black Friday 2019 fight videos to be uploaded online like:#BlackFriday #BlackFriday2019 pic.twitter.com/usz6O7oRy3

Me waiting for these Black Friday fight videos to drop pic.twitter.com/rVDBXVhL2C

Netizens seem to be really up for the entertainment to watch the fights. A day before there were tweets on how to capture the Black Friday fight videos. Do we need to say more?

In one of the serious cases which were reported from Fremount, California, there was a gun scare when someone shouted the word "shooter." People ran away from the area but later it was revealed that it was a false alarm.

(The above story first appeared on LatestLY on Nov 30, 2019 09:08 AM IST. For more news and updates on politics, world, sports, entertainment and lifestyle, log on to our website latestly.com).