It's a tale of two chefs and literally so. While one has been sacked for anti-Islam remarks, another is delighted to have found the Muslim family who saved him during the 1992 Mumbai riots. 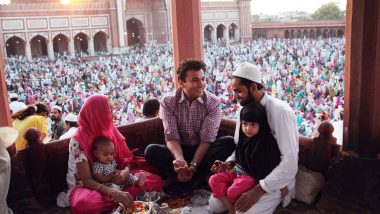 Mumbai, June 14: It's a tale of two chefs and literally so. While one has been sacked for anti-Islam remarks, another is delighted to have found the Muslim family who saved him during the 1992 Mumbai riots. Celebrity chef Vikas Khanna took to Twitter to share with the world how he was elated to have reunited with the Muslim family who protected him during the Mumbai riots.

Ever since 1992, Vikas Khanna says he has fasted for a day during the holy month of Ramzan in honour of the family. In a Facebook post of 2015, Khanna narrated the incident of 1993. "I was training in the kitchen of SeaRock Sheraton, Mumbai in 1992 December when riots broke and whole city was under fire. We were stuck in the hotel for days," he wrote.

On the holy occasion of EID. May every home and heart be filled with abundance, happiness and peace. #EidMubarak

May this EID bring the world together. #Gratitude pic.twitter.com/jGgy0y44oQ

"Iqbal Khan and Wasim Bhai ( Trainee Chef and a waiter, whom I lost touch with forever) and their families sheltered me and nurtured me during this time. Since that year, I fast for 1 day during the Holy Month to thank them and keep them in my prayers," Khanna added.

On Monday, Khanna tweeted that he was happy to have tracked down the family and shared an Iftar with them, following which he tweeted, "Heartwarming evening. All Heart. Tears. Pain. Pride. Courage. Humanity. Gratitude."

This comes at a time when another celebrity chef Atul Kochhar was sacked by Dubai's JW Marriott Marquis Hotel after he posted communal and hateful comments against Muslims following an episode of the Priyanka Chopra starrer TV series Quantico. Kochhar courted controversy after his tweet on Islam generated widespread social media outrage.

(The above story first appeared on LatestLY on Jun 14, 2018 05:49 PM IST. For more news and updates on politics, world, sports, entertainment and lifestyle, log on to our website latestly.com).