Cyclone Nivar Pics and Videos: Ahead of the Landfall, Parts of Chennai Inundated With Heavy Rainfall, Netizens Share Clips to Show the Intensity of the Stormy Weather

Cyclone Nivar is expected to make a landfall between November 25 midnight and early hours of November 26. Ahead of the landfall, people are sharing videos and photos on social media that show the horrific situation caused by the stormy weather. 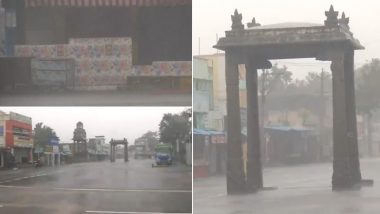 The state of Tamil Nadu is in a horrific situation at the moment. It may take a longer time for cyclone Nivar to make landfall, cities in the state are experiencing heavy rainfall, causing floods and waterlogged areas. Several areas in Chennai witnessed waterlogging for hours, while suburbs faced inundation, with non-stop rains, as cyclone Nivar is expected to intensify reportedly over the next several hours. People are facing severe difficulty as rain waiter remained stagnated in many areas. Ahead of the landfall, people and various news outlets are sharing videos and photos on social media that show the horrific situation caused by the stormy weather.

The powerful cyclone Nivar is barrelling towards the southeastern coast prompting authorities to declare a holiday, ban public gatherings, closing shops and mobilising rescue personnel. The Indian Meteorological Department (IMD) has reported that the cyclone is set to cross the coasts of Tamil Nadu and Puducherry, as a “very severe cyclonic storm.” It is expected to make a landfall between November 25 midnight and early hours of November 26.

#CycloneNivar is likely to cross between Mamallapuram and Karaikal during midnight today and early hours of 26th November, as per IMD pic.twitter.com/xLAWuRaWf8

#CycloneNivar As rain continued to pound #Chennai, many areas, including #Marina beach, were inundated, trees uprooted, and structures damaged

Hope everyone in Tamil Nadu and Puducherry is safe.

Please stay inside and be with your families.

#WATCH Strong winds at Mamallapuram ahead of the expected landfall of #CycloneNivar between Karaikal and Mamallapuram during midnight today and early hours of 26th November#TamilNadu pic.twitter.com/reuh7Qq2C8

The IMD’s Doppler Weather Radar at Sriharikota in Nellore district is reportedly monitoring the track of the cyclone Nivar. Flight operation is suspended at Chennai airport as a precaution. Meanwhile, the cyclone Nivar has intensified into a very severe cyclonic storm. The storm which was moving at 11kmph is now at 16kmph speed. Citizens are advised to stay indoors.

(The above story first appeared on LatestLY on Nov 25, 2020 06:25 PM IST. For more news and updates on politics, world, sports, entertainment and lifestyle, log on to our website latestly.com).