A Delta flight passenger jumped out of a moving plane with a dog on Tuesday saying that he left he would otherwise lose control. The two passengers and the dog were aboard an Atlanta-bound flight at New York’s LaGuardia Airport on Monday, when at least one of them opened a cabin door and jumped from the exit the plane shortly before takeoff. 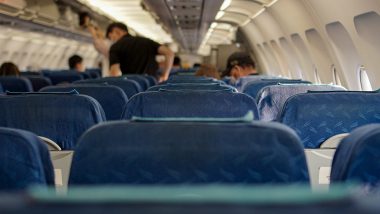 A Delta flight passenger jumped out of a moving plane with a dog on Tuesday. The two passengers and the dog were aboard an Atlanta-bound flight at New York’s LaGuardia Airport on Monday, when at least one of them opened a cabin door and jumped from the exit the plane shortly before takeoff.  He said that he ran onto a runway as he felt he would otherwise lose control, according to statements. 31-year-old Antonio Murdock and 23-year-old Brianna Greco, 23, of Florida will be facing charges of third-degree criminal trespass, according to Lenis Valens, a spokeswoman for Port Authority of New York and New Jersey. Xiamen Airlines Passenger Opens Plane Door For 'Fresh Air'! 4 Times Passengers Tried Opening Flight's Emergency Exit For Weird Reasons.

Murdock was charged with second-degree criminal mischief and second-degree reckless endangerment, Valens said. She allegedly heard the male passenger, identified by authorities as Murdock saying, "I need to get off the plane, I don’t want to sit here, I’m gonna pop the door."

Murdock's arraignment was held at New York City Criminal Court in Queens on Tuesday. A flight attendant said that during the incident, she saw a male and female passenger walking through the plane. The flight attendant informed authorities that there was no situation on the plane that caused Murdock to open the emergency door, according to arraignment proceedings. Woman Tried to Chase Aircraft at Bali Airport After Missing Her Flight; Watch Video.

Casey Johnson, a Manhattan resident present in the plane said that the couple appeared pleasant and nothing looked odd. Johnson said Murdock wanted to switch rows with Johnson, so they could have the last aisle of the plane to accommodate their dog. Johnson was quoted as saying, "And the next thing I know, I look up while we're moving, and I just see, I see lots of people standing up, and I see like four people running towards the front of the plane. And at this point, those must have been passengers that were running to try to, like, stop the person."

He said that the pilot told passengers over the speakers that the slide had been deployed and the door was opened. However, the pilot did not state that the passengers had fled. Johnson said that the plane was on the tarmac for more than an hour before returning to the gate. Woman Hops Onto the Conveyor Belt at New Istanbul Airport Thinking ‘It Would Take Her to the Plane’; What Happens Next Is Crazy!

The airline accommodated the remaining passengers on alternate flights. Murdock's next hearing is scheduled on February 9, and Greco is scheduled to appear in court on March 21, the Queens District Attorney's Office said. Valens, the Port Authority of New York and New Jersey spokeswoman, said the dog was taken to a Brooklyn animal shelter. In a statement, the Federal Aviation Administration confirmed the incident and arrests and referred additional questions to Delta and local authorities.

(The above story first appeared on LatestLY on Dec 23, 2020 09:06 PM IST. For more news and updates on politics, world, sports, entertainment and lifestyle, log on to our website latestly.com).