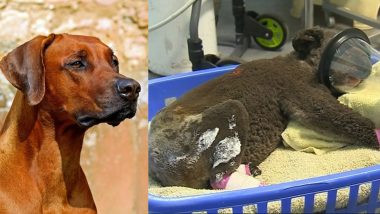 A  Border Collie-Koolie dog saved the lives of koala from Australian bushfires. The rescue dog named Bear other injured animals from the fire in New South Wales. He entered the burnt area by wearing socks to protect his paws. He sniffed out the animals from their faeces and fur. Rianna and Bear together saved the dogs in the Northern Rivers region of New South Wales. Bushfires had already killed six people in the area. With strong winds, Bear had a tough time detecting the lost koalas, but he eventually found them. Heroic Pet Dog Saves His Owners From Two Tigers at Kanha Forest in Madhya Pradesh.

Bear's owners had given him up as he was intelligent and highly energetic not like that of a pet. However, Bear finally found his calling as a koala detection dog for the International Fund for Animal Welfare (IFAW) alongside his handler, Rianna. The rescue dog is trained to alert Rianna about a nearby animal that requires help by sitting still. Dog Saves Girl from Falling and Drowning, Viral Video Leaves Internet in Tears.

One of the Koalas Recovering in Hospital:

Metro quoted IFAW's wildlife campaigner, Josey Sharrad as saying, "Now, more than ever, saving individual koalas is critical. With such an intense start to the bushfire season, it will be many weeks and months before some of these fires are out. All the while, wildlife will continue to need to be rescued and treated and may remain in care for some time.

Koala Admitted to Hospital After Being Rescued From Wildfire:

Strong winds added to the fire leaving Sydney completely covered in smoke. Bushfires continue to rage across the region making people flee to different regions. Those living in their houses have been complaining of stench of smokes other than hazy skies.  Bushfires in the past few weeks have affected about five million people in New South Wales.

(The above story first appeared on LatestLY on Nov 20, 2019 09:12 AM IST. For more news and updates on politics, world, sports, entertainment and lifestyle, log on to our website latestly.com).