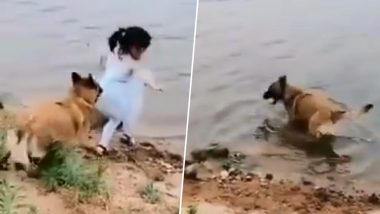 Caught amidst the mid-week blues? This video going viral on Twitter is here you make your day! A video of a dog protecting a little girl from falling into a river and drowning has left the internet emotional. Whoever doesn't believe that dogs are better than people, definitely hasn't seen the video. Indeed, dogs are the best thing that could happen to earth. In the video, you can see that a little girl runs towards the river seems to bring out a ball that had fallen into it, but to make sure the girl was safe, the dog immediately pulled her from behind by holding onto her frock and when she falls slightly on the shore, he runs to get the ball out of the river. The video shared by a Twitter user called Physics-astronomy.org has now gone viral and is garnering all kinds of amazing responses from Twitteratti. The post has received over 102,444 retweets and 230,594 likes, and rightfully so. Naughty Kid Pushes Dog From Her Ride Is the Cutest Video on the Internet.

Take a look at the video of dog saving the girl:

One word this video... pic.twitter.com/D1jpArOdco

Take a look at some of the reactions on the video:

Why can’t humans be more like dogs and want to protect and be loyal.

I would say a human-like action but I gave up .it is an animal like action😀

The video is clearly winning hearts on the internet and WHY NOT! Isn't it absolutely adorable? There is a reason dogs are called man's best friend. So now you know, dogs are better than people, just saying!

(The above story first appeared on LatestLY on Jun 18, 2019 06:04 PM IST. For more news and updates on politics, world, sports, entertainment and lifestyle, log on to our website latestly.com).