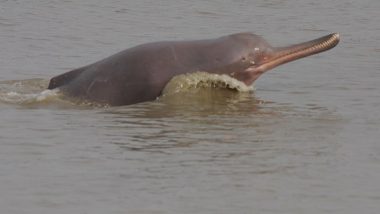 An endangered dolphin was caught in the net of a man fishing in River Ganges at Bihar's Purnia district. The Ganges river dolphin which is a rare sight got accidentally stuck in the fisherman's net. According to reports, the dolphin had strayed into the Parmaan River from the River Ganges. The number of dolphins has reduced significantly in the last century to less than 2,000. Ganges River dolphin is listed as endangered by the International Union for Conservation of Nature and protected by the Indian Wildlife Act. Endangered Ganges River Dolphins Spotted in Meerut! 5 Facts About the Blind Mammal That Will Surprise You (Watch Viral Video)

After the fish got caught in the man's net, he entangled it and let it back to the water. A small crowd had gathered on Friday as the man rescued the rare mammal. The villagers also alerted local authorities who relocate the dolphin and ensured it is safe. A witness told Southwest News, “The dolphin had strayed into the Parmaan River from the Ganges. Consequently, the aquatic mammal got entangled in the fishing net. A massive crowd gathered in the area to get a glimpse of the mammal.”

Earlier, as COVID-19 pandemic induced lockdown reduced pollution across India, the endangered Ganges River dolphin was spotted in Meerut. The blind mammal's appearance had surprised everyone bringing joy to the people living by the banks of the river.

Ganges river dolphins are primarily threatened by making of dams over rivers that alters their habitat thus stopping them from seasonal migration. This also stops them from going long distances and even makes them susceptible to inbreeding. According to WWF India, there are about 1,200 to 1,800 Ganges river dolphins left today. Some of the other reasons affecting them is overfishing, direct killing and pollution.

(The above story first appeared on LatestLY on Jul 07, 2020 09:23 AM IST. For more news and updates on politics, world, sports, entertainment and lifestyle, log on to our website latestly.com).