IPS Officer Posts Picture of Couple's 'PDA' at a Park at Delhi, Gets Schooled on Twitter For Moral Policing 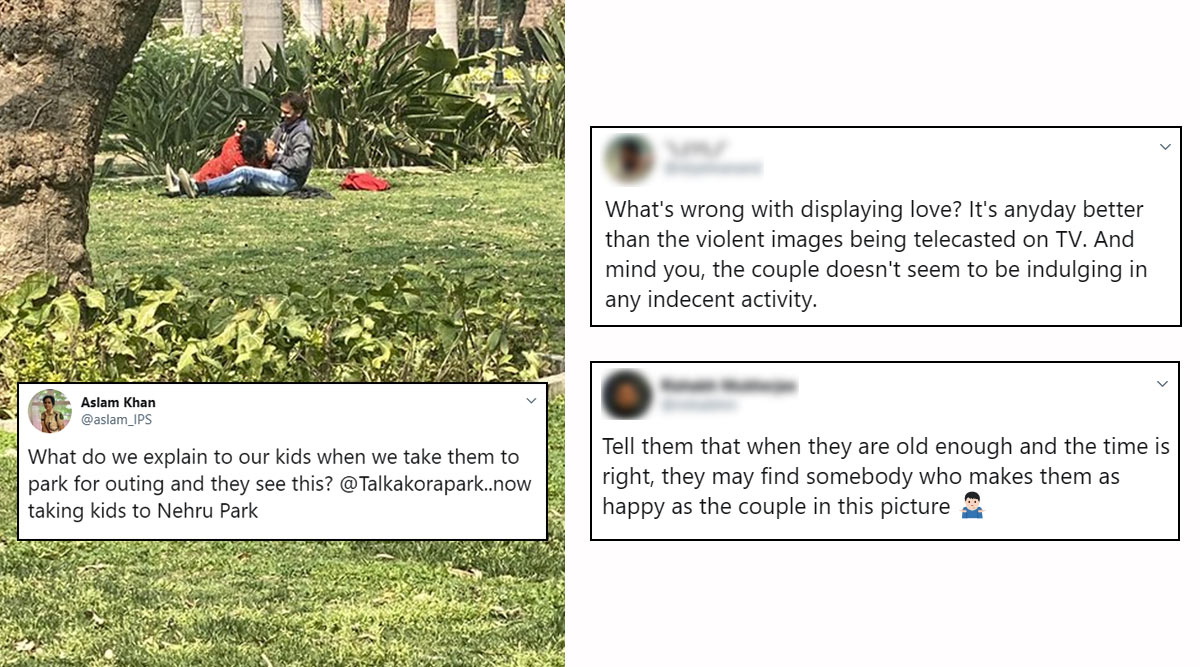 The societal mentality around couples hanging out together in parks or public places is very narrow. It is 2020, but some people still aren't open to the idea of seeing couples holding hands in public or sharing a light moment or two. It was even more shocking when an IPS officer, called out a couple at a park in Delhi, clicked their picture and shared it on Twitter. Her way of moral policing a couple who were spending some time together has not been received well by Twitterati. Netizens schooled her that there was nothing wrong with it and questioned about the consent of taking their pictures without their permission. Are There Any Safe Places for Young Couples to Have Sex in Mumbai, Without Getting Caught on Camera? But Are You Adult Enough?

IPS officer Aslam Khan tweeted a picture of a couple from Talkatora Gardens. The guy and girl seemed to have some light moment, both of them laughing and the girl slightly lying on the guy's lap, but nothing more crossing limits or so. Khan in her tweet said, "What do we explain to our kids when we take them to park for outing and they see this?" She further added that she took her kids elsewhere to Nehru Park. Her way of looking at the couple's public display of affection wasn't taken kindly by the netizens. People schooled her about explaining to her kids that its love and there's nothing wrong about it. Some even asked how could she take a picture of them without their consent and more so post it on social media.

Check IPS Aslam Khan's Tweet About Couples in a Park:

What do we explain to our kids when we take them to park for outing and they see this? @Talkakorapark..now taking kids to Nehru Park pic.twitter.com/qPDHRjGi4U

That people go to parks to chill and have a nice time and that it is ABSOLUTELY not ok to take their picture without their consent and post it on social media. It is very important to explain to kids to that only extremely repugnant, voyeuristic and creepy people would do that.

That people fall in and out of love and they can express their interest in each case other with consent and beauty, and without violence :-) it's beautiful, nothing to be worried about!

Tell them that this is NORMAL and two people are showing happiness and love for each other. Tell them that we are hypocrites who find this unacceptable in our country & will not bat an eyelid for similar behaviour in other countries.

What's wrong with displaying love? It's anyday better than the violent images being telecasted on TV. And mind you, the couple doesn't seem to be indulging in any indecent activity. https://t.co/xHPKG2z6kP

Learn Happiness From the Couple

Tell them that when they are old enough and the time is right, they may find somebody who makes them as happy as the couple in this picture 🤷🏻‍♂️ https://t.co/MAD0O8PIbq

As people mentioned, the couple was not indulging in any indecent exposure and just seem to be having a good time. It's a good moment between two lovers and there is nothing to catcall them. Children should be taught that it is okay and explain it as the emotion of love.