Karma Strikes! Man Makes Fun of Monkey's Penis, The Chimp Pees on Him Through The Car Window (Watch Hilarious Video)

He was driving in the enclosure car when a monkey came a bit too close. There was a small gap in the window from the where the monkey peeped in and poked his penis. 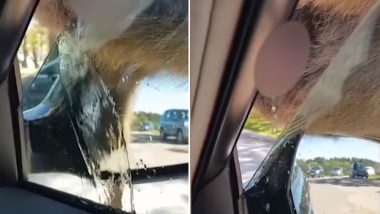 Making fun of monkeys is not a wise idea and a father who was on a safari trip learnt it the hard way. A father accompanying his wife and children on a trip to the Knowsley Safari Park in England made fun of a monkey's penis. And Karma came right back at him when the monkey peed in his car through the window! The extremely funny incident was caught on video and needless to say people on the internet can't get enough of it. The video quickly went viral. Egyptian Woman Jailed For 'Sexually Harassing' Monkey by Touching His Genitals, Watch The Viral Video That Sparked Outrage.

38-year-old Martin Chapman went along with his wife and two children to experience a bit of the jungle life on the Knowsley Safari Park earlier this month. He was driving in the enclosure car when a monkey came a bit too close. There was a small gap in the window from the where the monkey peeped in and poked his penis. The family was laughing at it but Martin Chapman went ahead and poked his penis and balls. But the funny incident turned unpleasant when the monkey ended up peeing in the car. Chapman was left swearing at the chimp! In A Hilarious Video From Chinese Zoo Monkey Snatches Tourist’s Wallet & Throws Away All the Money.

Watch Video of Monkey Peeing in Family's Car During a Safari:

I bet you too can't stop laughing, especially with the father left swearing at the uncalled visitor. The monkey probably figured that they were laughing at his organ and decided to teach them a lesson. Talking about the hilarious situation he was quoted in a report, "We were all laughing our heads off because he was just poking his bits through my window, so I thought I’d give it a cheeky flick – but he soon got his own back on me."  He added that he tried to pull up the window but he couldn't because the monkey held the top of his car. All his pee was going on Martin's legs. The incident is quite hilarious and we are sure Matin Chapman's experience will dissuade a lot of people from ever messing with monkeys again.

(The above story first appeared on LatestLY on May 27, 2019 01:26 PM IST. For more news and updates on politics, world, sports, entertainment and lifestyle, log on to our website latestly.com).