Kim Kardashian West Paddleboarding At the Island of Turks and Caicos, Twitterati Recalls An Iconic Episode After Watching the Video

The fans of Keeping Up With The Kardashians are referring an iconic episode. Twitterati is making the same joke when Kim posted the videos of her paddleboarding. 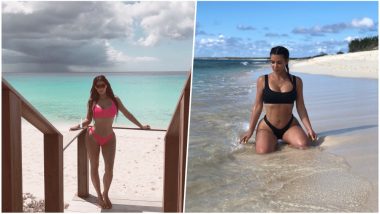 Kim Kardashian West tweeted a video of herself gracing in a bikini, paddleboarding over the crystal-clear water to wish her fans “Good Morning”. Her standout choice for this was a hot pink bikini as she has been flaunting her fit physique which by the way could hit this year’s summer biggest swimwear trends. The 37-year-old is having some blissful time at a tropical vacation to the island of Turks and Caicos, British Overseas Territory. And fans cannot take their eyes off from the beauty mogul as she flaunts her skin.

Kim has also documented and shared her time at the beach on social media and another one of her legs as she laid on the sand, showing off her neon nail polish on her toes. “Paradise baby,” reads one of her caption on Twitter! On the other hand, the fans of Keeping Up With The Kardashians are referring an iconic episode. You probably remember the moment last year when Kim Kardashian lost one of her $75,000 earrings while swimming during a vacation in Bora Bora. Well, Twitterati is making the same joke when Kim posted the videos of her paddleboarding.

Here is the video of Kim gracing in a bikini, paddleboarding!

And that is how, it all started again!

We don't really think so...

You still looking for that earring? https://t.co/UX5ji4ksFW

She ain’t never gonna stop looking for that earring https://t.co/7f85JKm7UV

Socialite Kylie Jenner found Kim K's earrings at the bottom of the ocean.

Kim Kardashian West has been living it up in Turks and Caicos with her sister Kourtney Kardashian. She even shared a picture of herself posing with big sis Kourtney during their tropical vacation together. Kim has been sharing a lot of flaunting pics from the vacay. And keeping all the jokes aside, the mother of three is definitely giving us some major beach body inspiration. We are flattered seeing her accurate curves in those sexy strings. From surfing photos to laying out in the sun pictures, her toned body seem to love the spotlight and how we love looking at the amazing pictures. And we cannot wait to see more!

(The above story first appeared on LatestLY on Apr 11, 2018 09:50 AM IST. For more news and updates on politics, world, sports, entertainment and lifestyle, log on to our website latestly.com).