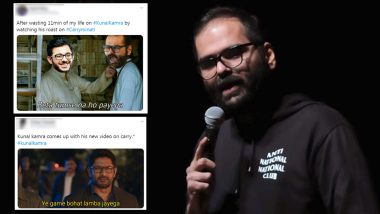 The YouTube vs TikTok row, or let’s just say, TikTok vs Ajey Nagar, aka CarryMinati, is taking new turns, almost every day. After YouTube removed Carry’s video where he roasted TikToker Amir Siddiqui, fans have rallied in support of the YouTuber. From demanding CarryMinati’s video to be restored by YouTube to giving poor ratings to TikTok on Google Play Store, Carry’s fans have left no stones unturned to shower their support to the Faridabad-based YouTuber. While the debate is on, comedian Kunal Kamra seemed to have interfered in the feud by teaching CarryMinati a thing or two about roasting in his latest video titled, "Aaja Beta Carry Teko Roast Sikhaye!" In his video, Kamra teaches Carry that roasting is not about cuss words. However, Carry’s angry fans trolled the comedian in returned with funny memes and jokes. From CarryMinati to Faizal Siddiqui, Why YouTube and TikTok Content Creators Should Stop Indulging in Tomfoolery and Realise Their Current Responsibility- Spreading Awareness About COVID-19, UNANIMOUSLY!

After TikToker Amir Siddiqui in his now-deleted IGTV video called out YouTubers, specifying that TikTok users create better content than YouTubers, Carry Minati roasted him in response. The video gave Carry millions of views on his channel and increased his followers, significantly. However, YouTube pulled down CarryMinati's video over its cyberbullying and harassment policy. And the online feud of YouTube vs TikTok never really ended. From #BanTikTok, to giving poor ratings on Google Play Store, netizens have showered full support to Carry. TikTok Faces Hate For 'Cringe' Content: Is TikTok Ban the Solution? From CarryMinati's 'Flawed' YouTube vs TikTok 'Roast' Video To The App's Google Play Store Rating Plummeting to 2.0, Here's How We Are Missing The Point.

Amid the online feud, stand-up comedian, Kamra poked fun at Carry Minati and the kind of the videos he makes. The comedian says that Carry is the opposite of intellectual and that all he does is yell slurs, in the name of roasting. He specified that roasting is not about using cuss words, which Carry is generally seen doing in his videos.

Kamra’s video was accompanied with various memes, and Carry’s video clips, which did not really go well with the latter’s huge fan followers. Besides, they also noted the irony that Kamra posted his video on his YouTube, a platform that Carry boasted in his deleted-roast video. Now that he interfered the online feud, Carry’s fans roasted Kamra in return, with hilarious memes and jokes.

Carry's Fans Are Not Impressed!

After wasting 11min of my life on #KunalKamra by watching his roast on #Carryminati pic.twitter.com/K7bJW326qq

Arnab bhai to #kunalkamra after publics reaction on his shitty video pic.twitter.com/iLwlrCq0BC

Kunal kamra comes up with his new video on carry.*#kunalkamra pic.twitter.com/uPOdXKLtDM

Meanwhile, Carry’s fans across are also waiting eagerly for his new YouTube video, ‘YALGAAR,’ which is set to be released soon. He released a teaser of the upcoming video, which already got a massive response on YouTube and social media platforms across. We don’t know, if this online battle is ever going to end, but we sure will have more memes and jokes lined up, to tickle our funny bones.

(The above story first appeared on LatestLY on May 29, 2020 09:37 PM IST. For more news and updates on politics, world, sports, entertainment and lifestyle, log on to our website latestly.com).