Lady Gaga has tweeted three simple words that sent her followers into a tailspin. She wrote, ‘Fame is Prison’ enough for the rest of Twitterati to partake of their favourite pastimes—making memes. Hilarious jokes and tweets surfaced online. 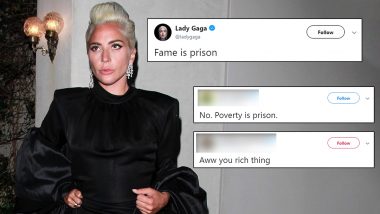 Lady Gaga has tweeted three simple words that sent her followers into a tailspin. She wrote, ‘Fame is Prison’ enough for the rest of Twitterati to spend their weekday guessing if it is her next album and partake of their favourite pastimes—making memes. However, the internet was divided on whether to make fun of the tweet or scold, taking a humorous dip on the rich. Gaga’s tweet has gained a lot of attention sparking some funny memes, tweets and jokes that are insanely going viral. This is why they say, watch your words, especially if you are a public figure, you must pay some attention to thinking before you tweet. Lady Gaga's Lookalike, Tierney Allen Fools Crowd at a Charity Event in Las Vegas.

As we said, the American singer’s tweet gathered thousands of attention. Of all, fans seem to give a big thumbs up to Amanda Knox, who was reportedly wrongly imprisoned for murder from 2007 to 2011. Her high-profile response, “I hear you, but… prison is prison,” is headlined in every outlet.

And there were those who made valid points, taking a jibe on those being wealthy.

Then give it up and donate your wealth to the poor

No. This. Is. Prison. pic.twitter.com/1rYgdMjKvd

That's A Little Mean Though:

Keeping the jokes aside, we hope that Mother Monster is doing okay. We are not sure about Gaga’s “Fame is prison” tweet meaning. She could suggest a lot. It could be that she is in a deplorable state about her celebrity status, or it could be her next big gig! Let alone Gaga decide and explain about what she actually meant with her latest tweet.

(The above story first appeared on LatestLY on Oct 26, 2019 12:27 PM IST. For more news and updates on politics, world, sports, entertainment and lifestyle, log on to our website latestly.com).