There's got to be something with NYC and its viral rats. Last time it was the pizza rat and this time it is the Hennessy rat. 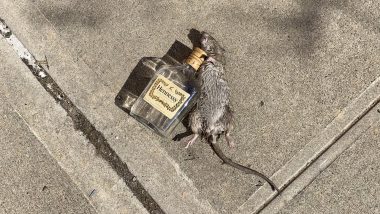 Remember the time a bunch of rats went viral for pretending to be snakes or the time we also has a pizza rat that went viral in NYC? Make way for the Hennessy rat from NYC that is going viral on the internet like crazy. This picture of a rat lying on a sidewalk next to an empty bottle of Hennessy cognac is becoming the butt of all jokes for so many reasons. Tracked on the next day of Valentine's Day make a hilarious sight for people. Rats Pretending to Be Snake to Avoid Predators? Here's The Truth About The Viral Video.

The photo was initially tweeted by Chris Williamson with a caption "Just another day in New York City," from the corner of Monroe Street and Ralph Avenue in Brooklyn Thursday. However, soon after that, the picture is being circulated on the internet with hilarious captions about what could've gone wrong with the rat.

Here are some of the funny reactions.

Comedian Patton Oswalt announced a sequel to Pixar's "Ratatouille," in the most hilarious way using this rat picture. In the sequel, Remy is going through a rough patch.

First day shooting RATA2OUILLE! There were creative differences with @BradBirdA113 but the new script and directing by Abel Ferrara are fantastic! So excited for you guys to see this! (Photo from IG: newyorknico) pic.twitter.com/sZsBXBVQkg

must've had a hell of a night

Should you laugh or not?

Yo I use to love Stuart Little, it’s a shame how much alcohol can change someone 😥

He was hanging with the pizza rat

Dear Mr NYC Drunk Rat, I've been there before too!

There's got to be something with NYC and its viral rats. Last time it was the pizza rat and this time it is the Hennessy rat. Looking forward to more such viral moments from NYC.

(The above story first appeared on LatestLY on Feb 16, 2019 05:29 PM IST. For more news and updates on politics, world, sports, entertainment and lifestyle, log on to our website latestly.com).