National Egg Day 2020: From the World Record Egg to Ones With Green Yolks, Egg-citing Stories About Eggs That Went Viral 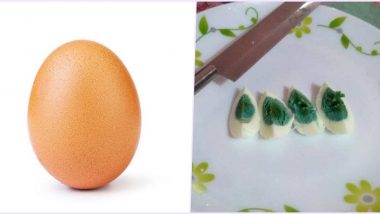 Happy National Egg Day! A fun observance that just celebrates the common breakfast item, an egg. If you love eating eggs, then you of course, know about the versatility of the dishes it can be turned into. June 3 is celebrated as National Egg Day. On this National Egg Day 2020, we look beyond the recipes of eggs, but ones that got everyone talking. Some of you must be remembering the world record egg, a picture that earned the most likes on Instagram. But it wasn't the only one, there are quite a few other egg-related stories that went viral, so let us know more about them.

Early last year, in January 2019, a photo of an egg was posted on an account named @world_record_egg. It became the most liked post online beating Kylie Jenner who held the record earlier. It got over 50,004,043 likes on Instagram. It went so viral, that it was even on a magazine cover. It gradually cracked in the next post, while people kept on guessing on what it could be. The egg was intended to raise awareness on mental health created by an advertising agency.

Makeup on An Egg

Just weeks after the egg went viral for most likes, a video of an egg getting a full make-up stunned people. A makeup artist made a video of a tutorial working on an egg and it went quiet viral that people began making memes on it.

Watch The Video of Make up on Egg Here:

DIY videos, craft tricks always impress netizens but one video of an egg changing colours, even its texture went viral. It was a rather bizarre craft which saw the change of colours in an egg from yellow, to red to eventually blue.

Recently, just last week, a picture of eggs with green-coloured yolks sparked confusion on social media. The eggs were from a poultry farm in Kerala. The eggs were studied by experts from Kerala veterinary and animal sciences university (KVASU) who too found it strange but it was related to the diet of the birds.

These are some of the interesting stories and videos about eggs that went viral on social media and caused quite a buzz. Did you know of them?

(The above story first appeared on LatestLY on Jun 03, 2020 08:31 AM IST. For more news and updates on politics, world, sports, entertainment and lifestyle, log on to our website latestly.com).