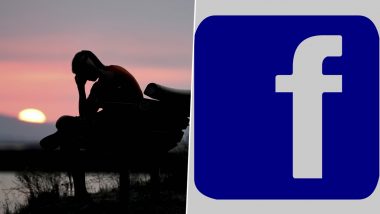 A 33-year-old Iraq War veteran identified as Ronnie McNutt went live on Facebook and did something unexpected at the platform. He picked up a rifle which misfired, sparking frantic calls to family and friends. Ignoring his loved ones' calls and pleas, he tragically took his own life. McNutt’s family, friends and close relatives are unfortunately being confronted by that extremely distressing moment again as the video of the death is shared on social media and viewed by many, including young children. It has created a significant debate on the internet. The graphic video of the 33-year-old dying by suicide on Facebook live has spread from there to TikTok, Twitter, Instagram and now YouTube. In most cases, his image ran alongside ads and attracted thousands of more views. This is why #ReformForRonnie is trending online as netizens urge for a social media reform. Facebook Won't Let French Euthanasia Campaigner Having an Incurable Degenerative Disease, Livestream His Own Death.

Not only mental health, the tragic death of the war veteran has led to criticism of Facebook and other social media platforms for failing to block the footage. The clip in question was not taken down for more than two hours, allowing it to recirculate on Instagram, TikTok and other sites. Along with calls for social media reforms, it has also cast a spotlight on McNutt’s life and struggles in the days and even years leading up to his death. Man Suffering from Blood Cancer Commits Suicide Live on Facebook in Darjeeling.

#ReformForRonnie was launched by a friend of McNutt’s, Josh Steen, who was quoted saying in a media report, “The live stream had already violated Facebook’s community guidelines before I even joined. Had Facebook intervened in some way, I don’t think that he would have taken his life because it would have stopped what was going on.” Because his video was not instantly removed, Steen says that it has made it more difficult for McNutt’s near ones to mourn his death, who now come across images of his death on social media. Along with #ReformForRonnie, #2hoursand41minutes is also trending online to highlight the amount of time it took for the platform to remove the clip.

#ReformForRonnie should be screamed from the highest rooftops until @Facebook and @tiktok_us answer for their extreme negligence in dealing with the proliferation of Ronnie McNutt's suicide video on their platforms. Enough is enough. We need change and we need it now.

hey @facebook explain why you left a video of a war veterans Ronnie McNutt's suicide up for 2 hours and 41 minutes despite the fact the video had already violated the terms of service? #JusticeForRonnie #ReformForRonnie

#ReformForRonnie is a serious thing. Idk how many of you have seen the video. Youtube still allows videos of ronnie to be uploaded. Even some are making ad rev off of it. If you are a MINOR or ADULT and are unaware of the situation do not click any videos with these two images. pic.twitter.com/CDvbMkB6L9

Just Us Geeks, a Geek and Pop Culture Podcast McNutt Was Involved in As Well Demands a Reform

Earlier today @Facebook issued an updated statement regarding the timeline of Ronnie's livestream and video removal. Please see their statement and our official #ReformForRonnie response. It's clearer than ever we need reform NOW! #2hoursand41minutes pic.twitter.com/ExFTPYWiCB

A Petition Was Initiated at change.org

Thank you so much for sharing and signing my petition for Ronnie! Ronnie needs justice and his family needs peace so they don't have to see his suicide over and over again all over social media. #ReformForRonnie #justiceforronnie

McNutt, who is also an autoworker regularly attended church, was a member of a Comicons club and also wrote comic book reviews for websites. Steen revealed to media reports that McNutt struggled with depression and post-traumatic stress disorder (PTSD) after serving in the Iraq War between June 2007 and March 2008.

(The above story first appeared on LatestLY on Sep 18, 2020 10:07 AM IST. For more news and updates on politics, world, sports, entertainment and lifestyle, log on to our website latestly.com).