'Rest in Peace George Floyd' Trends on Twitter, Netizens Offer Condolences With #BlackLivesMatter Message Amid Raging Protests Over His Death Across US 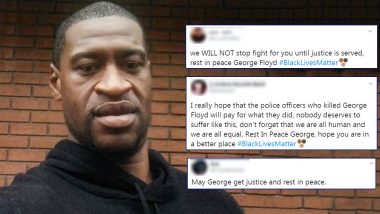 The United States of America is rocked by the third night of continued protests over the death of George Floyd in police custody. Protests against police brutality have continued in cities across the US including Minneapolis, Denver, New York and Oakland. As per the latest update, in Minneapolis, crowds have breached the police and set the entrance on fire. While the protests continue across the US, people on Twitter are trending #ResinPeaceGeorgeFloyd heavily, in support to get Floyd justice. Netizens have flooded their Twitter timeline sharing their condolence to Floyd’s family. Pictures and doodles of the 46-year-old black man have surfaced on social media, as internet users continue to trend #JusticeForFloyd and #BlackLivesMatter messages. Minneapolis Protests: CNN Crew Arrested, Police Station Charred, Lootings Reported, Trump Warns of 'Shootings' - Five Updates.

On May 25, a 46-year-old black man, George Floyd was reportedly killed by a white police officer, identified as Derek Chauvin. A viral video, shot by a pedestrian surfaced online that shows Chauvin knelt on the former’s neck for about seven long minutes until his body became unresponsive. After being taken to the Hennepin County Medical Centre, he was pronounced dead. The video was released on social media and netizens questioned the murder of Floyd and racism and lack of police sensitisation. Ever since then, #JusticeforFloyd and #BlackLivesMatter began to trend on social media. Now, #RestinPeaceFloyd continues to run as one of the top trends on Twitter with netizens for his soul to rest in peace as revolts across the US continues over Floyd’s death.

Thanks for doing this!💖💖💖

May George get justice and rest in peace. pic.twitter.com/MmkEJP7GJz

we WILL NOT stop fight for you until justice is served, rest in peace George Floyd #BlackLivesMatter pic.twitter.com/BmDYh3vHTQ

I really hope that the police officers who killed George Floyd will pay for what they did, nobody deserves to suffer like this, don’t forget that we are all human and we are all equal, Rest In Peace George, hope you are in a better place #BlackLivesMatter pic.twitter.com/Bo5KFonFEV

my heart is breaking apart after watching a video. I can not imagine the feelings of his loved ones. we live in a world that denies the same freedom and rights to someone based on skin color. these people should be punished! rest in peace.. #GeorgeFloyd pic.twitter.com/brWQG4BihI

Petition Has Been Filed for George to Get Justice

ENOUGH IS ENOUGH. Justice for George Floyd - ⚠️Sign the petition. May he rest in peace. We won't stop fighting! https://t.co/8CcENpN9bv

Protest Continue Across US

As the footage went viral, the Minneapolis Police Department had removed Derek Chauvin along with three officers, namely, Thomas Lane, and J. Alexander Kueng and Tou Thao, who were involved in the killing of Floyd. Thousands took to the street, protesting against the violent act against Floyd. A state of emergency has been declared in Minneapolis, St Paul and surrounding areas.

(The above story first appeared on LatestLY on May 29, 2020 08:12 PM IST. For more news and updates on politics, world, sports, entertainment and lifestyle, log on to our website latestly.com).