A stray dog joined in at one such event where Guru Nanak Jayanti celebrations were held. Guru Nanak Dev Ji kirtans and prayers were held and the dog was seen attending them, sitting very comfortably among the devotees. 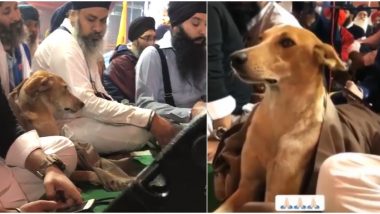 People of the Sikh community celebrated one of the holiest days of the year on November 12, the festival of Guru Nanak Jayanti. Also known as Gurpurab, the celebrations were extra special this year as it was the 550th Parkash Purab. The Sikh community all over the world marked these divine celebrations. A stray dog joined in at one such event where Guru Nanak Jayanti celebrations were held. Guru Nanak Dev Ji kirtans and prayers were held and the dog was seen attending them, sitting very comfortably among all devotees. Few video clips of this stray sitting and enjoying the Gurpurab celebrations in one of the Gurudwaras have been shared online and needless to say, the internet is in love. The dog was offered with a shawl and given traditional food too. Viral Video of Adorable Dog Attending Keertan Devotedly Is Winning Hearts on the Internet! Check Twitter Reactions.

Facebook user Gurpreet Chawla shared some lovely videos of a stray dog sitting amongst devotees during Gurpurab celebrations. The exact venue from where these videos are taken is not known but it is the gesture and presence that counts more. The dog was offered a shawl by some people along with the traditional Langar that followed later. As the caption rightfully mentions, "Animals Deserve Same Love as Humans do..." There are three short video clips of the dog attending the religious kirtans and it is just too adorable. People too are loving it and the videos are going viral. Monkey Attends Funeral and Consoles a Crying Woman in Karnataka (Watch Viral Video).

The celebrations of Gurpurab begin early in the day with people being part of Prabhat pheris and then visiting the Gurudwara to offer their prayers. The dog probably was feeling too cold and felt more comfortable after being given a shawl too. Isn't it lovely to see him sitting along so casually? It is also sweet on part of the people who let him attend the celebrations instead of shooing him away. The videos have been shared more than 6000 times and have got more than 2 lakh views. People were also overwhelmed and some blessed the dog in the comments section.  Well, it is not every day that we see of such things and come across them only warms out heart.

(The above story first appeared on LatestLY on Nov 17, 2019 07:50 PM IST. For more news and updates on politics, world, sports, entertainment and lifestyle, log on to our website latestly.com).