An orca named Tahlequah had gone viral in 2018 after she carried her dead calf with her for 17 days. Videos of the incident had broken a million hearts as the whale kept the body of the dead baby near to near even 2 weeks after its death. After that, the killer whale was spotted pregnant by Sealife Response, Rehabilitation and research. 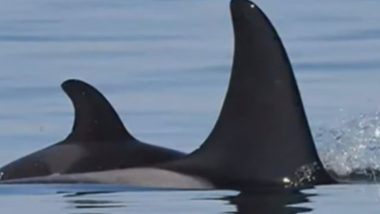 An orca named Tahlequah had gone viral in 2018 after she carried her dead calf with her for 17 days. Videos and pictures of the incident had broken a million hearts as the whale kept the body of the dead baby near to near even two weeks after its death. After that in July, the 21-year-old killer whale was spotted pregnant by Sealife Response, Rehabilitation and research. The pictures of the pregnant whale was indeed a time of happiness. It seems, she delivered and the mother and baby are now both doing fine.

She gave birth on September 4 to her new calf, named 'J57' by researchers, in the eastern Strait of Juan de Fuca in US waters. According to the Whale Research Center, the new calf appear to seem to be 'swimming vigorously alongside its mother'. In 2010, Tahlequah gave birth to one calf named 'J47', also known as 'Notch'. She had a miscarriage in mid-2010 and then again lost another baby in 2018. Experts had feared that she would likely lose this new also. Mother Orca Ends Her Tour of Grief! Releases Dead Calf’s Body After 17 Days of Mourn.

Sealife Response, Rehabilitation and Research conservation group took to Twitter writing, "We hope folks on the water can give the Southern Residents plenty of space to forage at this important time. With such a small population every successful birth is hugely important for recovery."

The centre has not yet released the gender of the new calf. It said that when Tahlequah was spotted she was separate from the other whales and crossed the border into Canada. The centre said, "So we ended our encounter with her after a few minutes and wished them well on their way. We hope this calf is a success story. We know that it takes a day or two to straighten after being bent over in the womb, so we assign its birthday as September 4, 2020." Whale Shark, 25-Foot-Long, Washes Ashore at Mumbai's Sassoon Dock.

They have been keeping a steady look at the whale's progress with the use of remote-controlled drone surveillance from 100 feet up the air. Experts say that a lack of salmon causing hunger is related to the southern resident whale's poor reproductive circumstances.

(The above story first appeared on LatestLY on Sep 07, 2020 08:44 PM IST. For more news and updates on politics, world, sports, entertainment and lifestyle, log on to our website latestly.com).