Do You Remember Tahlequah the Killer Whale That Carried Dead Calf for 17 Days? She Is Pregnant Again! (See Pictures) 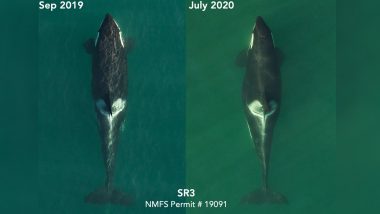 A killer whale who carried her dead newborn calf for 17 days is pregnant again. Scientists had found that the whale, Tahlequah carried her baby for around 1,600 kms. While killer whales are known for carrying dead calves for a week, scientists had said that Tahlequah set "a record". Now, researches in Washington found that the same whale was now pregnant while recording drone images of Southern Resident killer whales. Two other whales were also found to be pregnant using the drone. The images were taken from more than 30m above them so as to not disturb them in their habitat. The aerial images confirmed that she is the last stages of her pregnancy. Mother Orca Ends Her Tour of Grief! Releases Dead Calf’s Body After 17 Days of Mourn.

Tahlequah is part of a community of three pods that includes some 72 whales. They are frequently found off the southern end of Vancouver Island in Canada and in inland marine waters of Washington state in the US. Both Canada and the US list down the Southern Resident killer whales as endangered. Humpback Whale Mother Protects Calf From Pod of Killer Whales Off Coast of Western Australia, Rare Occurrence Captured on Drone (Watch Video)

While pregnancies among Southern Resident killer whales are not unusual, the majority of recent ones have not been successful. According to research from the University of Washington, their failures to reproduce are found due to nutrition and access to Chinook salmon which has been on the decline in recent years. Considering the situation, scientists have warned boats to stay away from the whales.

Talking about Tahlequah, Ken Balcomb, senior scientist at the Centre for Whale Research at the time that its display of grief was unusual. He was quoted, "We've seen mother whales carry dead babies briefly, for parts of a day. We saw one a few years back for a couple of days. But this sets a record." Killer whales are pregnant for 17-18 months, according to SR3.

(The above story first appeared on LatestLY on Jul 29, 2020 08:37 PM IST. For more news and updates on politics, world, sports, entertainment and lifestyle, log on to our website latestly.com).