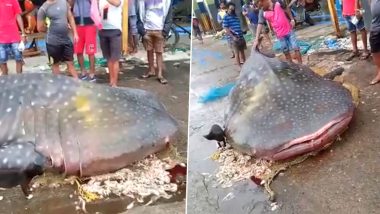 Mumbai, August 12: A whale shark was found washed ashore at the Sassoon Dock, one of the busiest fishin hubs of Mumbai, in the wee hours of Wednesday. The big fish was stated to be 25-foot-long. The Fisheries Department was informed by local fishermen as soon as it was spotted at the dock. Do You Remember Tahlequah the Killer Whale That Carried Dead Calf for 17 Days? She Is Pregnant Again! (See Pictures).

Atul Patne, Commissioner of Fisheries, confirmed that his department took cognisance of the incident and reached the dock after being intimated. An inquiry is being conducted on how the fish washed ashore, and due action will be taken if anyone is found at fault, he said.

The fishing of whale shark for consumption, commercial or any other purpose is strictly prohibited as the fish falls under the list of species protected under the Wildlife Protection Act.

According to reports citing unnamed sources, the fish could had dragged itself into the nets and got damaged by the trawler boats that return late in the evening. Officials, however, did not confirm on whether the whale was found with injuries.

On earlier occasions, said a local, any big fish which washes ashore is pushed deep into the sea b the fishermen themselves to ensure its survival.

The incident at Sassoon Dock comes two weeks after the carcass of a 30 feet dead whale was found washed ashore a beach in Kochi. The mammal's body was recovered near the Manassery Fishing Spot.

(The above story first appeared on LatestLY on Aug 12, 2020 09:09 PM IST. For more news and updates on politics, world, sports, entertainment and lifestyle, log on to our website latestly.com).