Another reason why Thugs of Hindostan is receiving flak from the audience is the misogynistic treatment of their female characters. 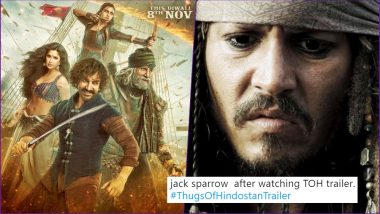 One of the highly-awaited films of the year, Thugs of Hindostan released its trailer video on September 27. And as expected, it took the social media by storm. Starring Bollywood stalwarts Amitabh Bachchan, Aamir Khan, Katrina Kaif and Fatima Sana Shaikh, this Diwali 2018 release has got the netizens divided. On the one hand, you have fans going gaga over the TOH trailer for its stellar cast and grand sets. While on the other hand, you got movie buffs who just cannot ignore the similarities Thugs of Hindostan shares with several cult movies, notably Disney’s Pirates of the Caribbean (POTC) and South blockbuster Bahubali. No matter how much you loved the trailer, you cannot brush these claims aside because the similarities are too glaring to ignore. So, like always, the Twitterati have put forward their thoughts in the form of funny jokes, memes, tweets, images and GIFs. In fact, they have dubbed Aamir Khan as ‘Garibo Ka Jack Sparrow’ with super hilarious Thugs of Hindostan memes! Thugs of Hindostan Trailer: Every Frame in This Aamir Khan, Amitabh Bachchan, Katrina Kaif, Fatima Sana Shaikh Pirate Saga Screams EPIC - Watch Video.

After teasing fans with movie posters for last few days, Yash Raj Films finally released the teaser of their ambitious project on Thursday. Now, Thugs of Hindostan, as we all know, is based on Philip Meadows Taylor's 1839 novel Confessions of a Thug. From the teaser, we come to know that the film revolves around the battle between the East India Company (EIC) who want to rule over India and Azaad, played by Amitabh Bachchan, who is a revolutionary pirate resisting the EIC. Azaad's pirate group also features Fatima Sana Sheikh who plays an ace archer. Aamir Khan essays the character of Firangi, a person who is deployed by EIC to help them capture Azaad. As for Katrina Kaif, we see her shaking a leg in elaborate glamourous dance sequences, and is probably also the love interest of Aamir. So that was TOH trailer in a nutshell, and now begins the reasons why the teaser has become a butt of all jokes on the social media. Thugs of Hindostan: 7 Best Moments From the Trailer That Made Us Cheer for Aamir Khan, Amitabh Bachchan and Katrina Kaif.

The first reason is the obvious similarity between Aamir Khan’s Firangi and Captain Jack Sparrow, a cult character played by Johnny Depp in POTC. Firangi, like Sparrow, seems like a fun yet deceitful character. Apart from the character, some fans are upset over the blatant copying of scenes from the original Hollywood movie. For instance, there’s a scene in the teaser where Aamir Khan is seen dressed up in colonial British army uniform with the blonde wig, which will remind you of Depp’s British soldier avatar in the Pirates of the Caribbean. And what's with the PK hangover? There are many, many such scenes in TOH teaser that look inspired by the Disney film.

Not just Pirates of the Caribbean, TOH is believed to be inspired by blockbuster Indian film franchise, Bahubali. In the scene introducing Fatima’s character, we see the Dangal girl shooting four arrows at one go -- a direct lift from one of the scenes in Bahubali: The Conclusion movie where Prabhas as Bahubali teaching Anushka Shetty’s Devasena to shoot multiple arrows at a time! Indian films are accused of plagiarism, and sadly Thugs of Hindostan is accused of the same by Twitterati. These funny tweets on film is a must-see for you to decide if TOH is epic or an epic fail!

Fatima - hence prove that she can only do wrestling , terrible acting

Katrina - including just for dance

Ctrl C, Ctrl V and We Got Thugs of Hindostan

Mediocrity at Its Best

Just logged in to talk about #TOHTrailer. What the hell was that??? I was prob the most excited on my TL and was literally waiting for this movie. Didn’t know what was worse, Aamirs tacky acting, VFX, AB in this weird role, very underwhelming music Can be a great comedy tho😳😜 pic.twitter.com/hHpDDtU7rs

Don’t Call It a Copy, Bahubali is an Inspiration for TOH

Scenes - Pirates Of The Caribbean And Bahubali

Another reason why Thugs of Hindostan is receiving flak from the audience is due to the misogynistic treatment of their female characters. The teaser, which is over three minutes long did not think it necessary to introduce Katrina's and Fatima's characters by their names; the trailer focuses its attention only on Amitabh's Azaad and Aamir's Firangi. In fact, the two ladies are not given in single dialogue in the entire trailer and are used as mere props in the film. Watch the teaser again and decide for yourself if all the allegations levelled against the trailer are called for or not.

(The above story first appeared on LatestLY on Sep 27, 2018 03:01 PM IST. For more news and updates on politics, world, sports, entertainment and lifestyle, log on to our website latestly.com).