TikTok Down Funny Memes and Jokes Trend on Twitter After App Goes Down in the US With Video Likes Crashing to 0! 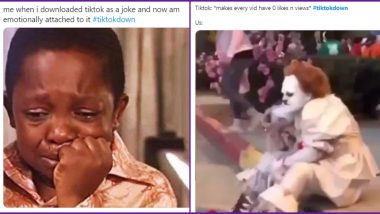 TikTok users in the US and UK experienced an outage last night, with the likes on videos crashing down to zero. Users and creators frantically rushed to Twitter to see if there was a glitch and the result was a lot of funny memes and jokes that followed. The outage sparked a fear if the app was permanently shut down. The fears prompted out of US Secretary of State Mike Pompeo suggesting that popular app might be banned in the country amid growing tensions with China. The Chinese app was banned in India a few weeks ago over the same reasons and security concern. #TikTokDown is trending since last night with some funniest memes and jokes. #TikTokBaninIndia Funny Memes and Jokes Trend on Twitter As Netizens Laud Govt's Move to Ban The Chinese App Among 59 Others.

The company also tweeted and acknowledged the glitches in the app, mentioning they were working on fixing things. Not just the US, some users in UK too were facing the problem, close to 20,000 people reporting issues. The likes on all the videos went down to zero. For all creators, likes are important and seeing the number go down sparked a frenzy on Twitter. Fears of the app shutting down were also doing the rounds. Other than just the US and UK, people around the globe also started reporting issues in using the video-making application. The result was seen on Twitter with some funniest memes and jokes.

all the 14 year olds moving to twitter once tiktok is deleted #tiktokdown pic.twitter.com/HNXPkTiEgf

yes i got emotionally attached to tiktok and it not working scares me bc what am i gonna do in my free time now? 💔 #tiktokdown pic.twitter.com/xqMtB2qBx6

How to Pay Bills?

all the tiktok creators after it shuts down #tiktokdown pic.twitter.com/xcltpJxPxN

me when i downloaded tiktok as a joke and now am emotionally attached to it #tiktokdown pic.twitter.com/5wbqaz7seC

Us pretending we didn’t just have a mid life crisis over TikTok after it finally came back up #tiktokdown pic.twitter.com/9VuB4YTXst

tiktok is down? what am i supposed to do in my free time? what is going to make me laugh? i don’t even remember what life was like before tiktok. i’m questioning everything. my life feels incomplete #tiktokdown pic.twitter.com/JxdSGuCthd

The Anxiety of People RN

Visual representation of my Anxiety rn that tiktok is not working 😭😭 #tiktokdown pic.twitter.com/BdlvKAATg7

A lot of people have posted crying GIFs to express how they felt when the app went down for quite a while. It is back now and so are the likes but the slight thought that it may have got banned, especially after the considerations put people in worry on Twitter. Others were just there to simply enjoy the memes.

(The above story first appeared on LatestLY on Jul 10, 2020 08:55 AM IST. For more news and updates on politics, world, sports, entertainment and lifestyle, log on to our website latestly.com).