US Blogger Loses Her iPhone X in Jaipur and Gets It Back ‘Miraculously’, Calls Indians Too Poor to Afford Apple Phone, Slammed by Netizens

She did not expect to get it back since the phone was “worth more money than some people in this country will have in their whole lifetime.” 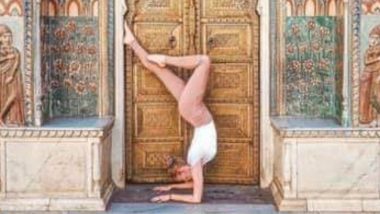 An American yoga instructor, a travel blogger and an Instagram influencer have stirred hatred on social media after she implied that Indians are too poor to buy an iPhone. Colleen Grady recently visited the country and on the streets of the pink city Jaipur, she lost her 5-month-old ‘expensive’ iPhone X. Well being panic in a foreign land is truly understandable but such bigotry comment is certainly not. She gets her Apple phone back from a person who “miraculously” is an iPhone X owner as well. Her Insta post soon garnered attention; Grady was slammed by the netizens and labelled as “racist” for her behaviour. It’s New Year 2019 & We Already Have 5 Hilariously Viral Videos Breaking the Internet in the First Week.

The Instagram post which is now deleted reads, “Yep, I lost it in the poorest most overcrowded country I have ever visited and one of the most scammy tourist cities in all of India.” She further added that she did not expect to get it back since the phone was “worth more money than some people in this country will have in their whole lifetime.” Someone who finds it “probably would not even know what to do with it,” her post reads further. Soon after the post went viral and triggered enough hatred online, the blogger deleted it including her account. But, the screenshots of the post are viral on social media. Germany's Hottest Policewoman Told to Stop Posting Sexy Bikini Pictures on Instagram to Keep Her Job.

Grady further wrote, “We called the family and zipped around on their motorcycles to get back to my computer to try find my iPhone. Then I found out that it is irrelevant if your phone is on airplane mode. The owner of the guesthouse left some messages to my phone in Hindi in case anyone found it. And I just was still frozen in shock.”

Netizens Labelled her as Racist.

Wow. Just wow. This is so white, it's blinding. Just astounding how racist this person in India is being. Just, wow. https://t.co/05TJySMKcH

‘Mindbodycolleen’ - her mind is so impure that any amount of yoga won’t help cure anything. She deserves to be in an asylum.

To some it Reeked Colonial Hangover.

Later the same day, she received a call from a local who informed that her phone was found. “But then an hour and a half later someone called back from my phone. We raced again on a motorcycle through the chaos to meet some stranger in a dark alley to retrieve it. (All I was thinking was should I have brought my mace?) lol,” she joked. Grady called it “miraculous” that the person who returned her phone was also an iPhone X owner like her. “Miraculously the person that found the phone also had an iPhone X. Now that is another miracle in itself because hardly anyone in this country has an iPhone period. They gave it back with no problems and didn’t want anything in return, just blessings.”

She even shut down her her travel website. The front page stands an apology which impressed none.

her response is...... a treat pic.twitter.com/phuYWEnG5a

After gaining as much hatred and retrieving her phone, Grady issued an apology for the post. “Ask yourself — If you found a smart phone device on the street locked, out of service, broken, no buttons, and the software is not in your native language: would it be easy for you to find the owner and return it? For me, the answer is no. I think most of us would agree the answer is no. This has nothing to do with race, ethnicity, class, education, etc,” she wrote in her defence. But her apology did not go down well too with the people online who continued to slam her on social media.

(The above story first appeared on LatestLY on Jan 06, 2019 12:22 AM IST. For more news and updates on politics, world, sports, entertainment and lifestyle, log on to our website latestly.com).