Video of Driverless Premier Padmini on a Highway Is Freaking Everyone Out! Netizens Wonder How the Vehicle Is Running on Its Own

A video of Premier Padmini car on the highway is making rounds on the internet. An old person can be seen sitting on the co-driver seat, totally relaxed, and there is no one on the driver’s seat. The video is surely freaking everyone out. 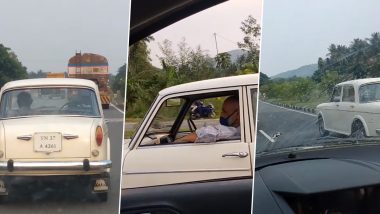 No, it’s not a Tesla or any automated car, but a Premier Padmini. It is one of those first family cars that was a hit amongst youngsters, celebrities and everyone else. Premier Padmini is an iconic car, and if you spot it on the road, anywhere in India, you are bound to pause and look the vehicle zoom passing you. But have you ever thought, if it can go driverless? A video of Premier Padmini car on the highway is making rounds on the internet. An old person can be seen sitting on the co-driver seat, totally relaxed, and there is no one on the driver’s seat. The video is surely freaking everyone out. As the clip went viral, netizens wonder how the vehicle is running on its own on the highway. Canadian Man Falls Asleep Behind the Wheel of His Tesla Car As Vehicle Breaks Speed Limit of 140kmph.

The video was shared by a Facebook user, Tagore Cherry. The clip begins with a car following the Premier Padmini on the highway, which seemed to run on its own. The man can be seen sitting on the co-driver’s seat, totally relaxed, while the driver’s seat was empty. The man wearing a mask, was the only person in the vehicle. The video was taken from another car following the Padmini, shows how it was changing the lanes effortlessly, without a driver. After a close approach, you can see, there is no one on the driver’s seat, and it is practically impossible for the car to run such smoothly. Driverless Range Rover Sport SUV Takes On One of the Most Challenging Roads in UK.

Cherry uploaded the video on Facebook, with the caption, “Today saw something a old man driving his padmini car sitting in passenger seat.” People were confused as to how is he doing it. How can the car drive on its own? You can watch the video HERE.

It can happen, and it is the person occupying the co-driver seat who holds the secret. He is actually controlling the steering of the car by extending his right arm, while looking calm, making it appear effortless. A Facebook user, who also spotted the car, quite often, noted how he is doing it. “The Trick is Front seat is a full Seat, Gear is Under Steering Wheel. Once he Reached Highway on Top gear, He Moved from driver seat to Next seat, He use the Acceleration pedal. Like driving school vehicle, he'll go that side suddenly in case of emergency. He mostly drives that car in 3 lane Highway, So maximum any one lane available free always. I also saw him too & Video tape him,(sic)” reads his comment on the post.

So, that’s the secret. The video is from Tamil Nadu, however, the exact location was not known. The man in the video surely managed to freak not only the onlookers but social media users as well. However, it is advisable not to follow the trick and be a responsible driver on the road.

(The above story first appeared on LatestLY on Oct 13, 2020 02:28 PM IST. For more news and updates on politics, world, sports, entertainment and lifestyle, log on to our website latestly.com).