World Lion Day 2020: From Lion Cubs Enjoying a 'See-Saw' to Gir Forest Lion Couple Arguing like Humans, Videos of the Mighty Animal That Went Viral In The Past 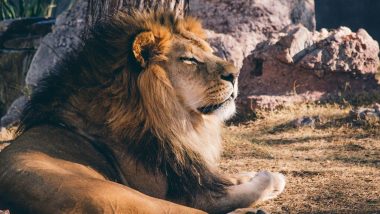 Every year we celebrate World Lion's Day on August 10. And as the name suggests, the day is dedicated to all the lions around the world. The aim of this day is to spread awareness about lions, their habitat and how some species are at a threat of extinction. The day also aims at educating people about lions and find ways to work towards their conservation. In India, the Asiatic lions suffer the threat of being extinct as they are listed as endangered in the International Union for Conservation of Nature (IUCN) red list. Mainly found in the restricted Gir forest it is important to take measures to protect them. However, as we stay at home amid the coronavirus pandemic we can celebrate World Lion's Day by sharing videos of lions that have gone viral in the past to realise how important the mighty animals are. Pride of Lions Spotted Sleeping on Road in South Africa's Kruger National Park During Coronavirus Lockdown (See Pictures)

Video of Lion and Lioness Arguing in Gujarat’s Gir Forest

Recently, a video of a lion and lioness fighting in the Gir Forest in Gujarat had gone viral and it looked like a scene from every Indian household. In the video you can see the lion and lioness couple engaged in an argument, roaring at each other. In the video, you will see the lion trying to end the fight by trying to calm the angry lioness down. Netizens couldn't stop but relate the argument to how human couples argue in every second house.  Lions Drink Water Together at River in South Africa's Mala Mala Game Reserve, Spectacular Sight Caught on Camera

A pride of lions is a grand sighting and a few months ago, one video featuring a pride of about 20 lions coming down to drink water at South Africa’s Mala Mala, Private Game Reserve had gone viral. The Mala Mala is within the Sabi Sand Game Reserve, along the Sand River, and part of the Greater Kruger ecosystem and the amazing video took over social media. You can watch the video here.

Three Lionesses Swimming Across a Shetrunji River in Gujarat

Most people think that lions can't swim but a video that went viral a few weeks ago shocked the world where three lionesses could be seen crossing a river by swimming. The video was going viral on social media and HOW! The video showed three lionesses swimming about 200 metres across the Shetrunji River near Rawal Dam in Gir East. Watch video:

This is probably the cutest lion video reportedly captured by Daniel Bailey, who is a guide at the Mala Mala Game Reserve in South Africa. Little lion cubs enjoying a "see-saw" which was basically a seesaw type structure in the forest. The video also features the cute stumble of the cubs.

Lions are found majorly in Africa and the ones found in India are slightly smaller in caparison. History has it that the Asiatic lions were found commonly in the Indo-Gangetic plains in the past and were treated as the royal animal during the Mauryan, the Gupta and the Mughal period too. However, during the British Raj lions were hunted on a large scale.

(The above story first appeared on LatestLY on Aug 10, 2020 11:32 AM IST. For more news and updates on politics, world, sports, entertainment and lifestyle, log on to our website latestly.com).