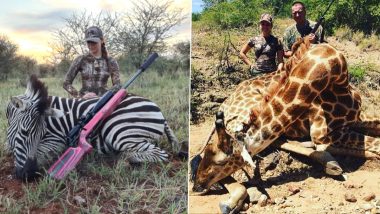 Quite understandably, Michaela received a lot of hate on social media for her pics, however, she defends her actions, and claimed she is only posting the pics to raise money for conservation efforts. "I plan to continue uploading as much content as possible so that I'm able to fund the veterinary care for animals in need because this is why I started off my journey in the first place - to help and protect the animals. At age twenty-four, I moved to South Africa to start my career as a conservationist where a typical day involved studying the animal that we wanted to manage and then stalking out the herds to detect the weak and old members, which we then hunt down", she said to DailyMail.

"You don't want overpopulation - especially in the wild - as it can lead to a struggle for water and food if there's too many of the same species, which is why I do what I do. Once we detect the members of the herd to cull, we then detect members that have strong genetics and therefore need to be taken care of for sustainable population growth." A typical day hunting involves studying the species of animal that needs population management and stalking them for three days until they can detect the weaker members of the herd to kill.

(The above story first appeared on LatestLY on Apr 16, 2021 12:31 PM IST. For more news and updates on politics, world, sports, entertainment and lifestyle, log on to our website latestly.com).