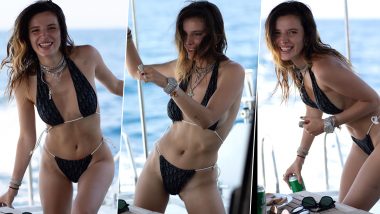 After facing immense backlash, Bella Thorne apologised by saying: "I wanted to bring attention to the site, the more people on the site the more likely of a chance to normalize the stigmas, And in trying to do this I hurt you," Thorne wrote on Twitter. "I have risked my career a few times to remove the stigma behind sex work, porn, and the natural hatred people spew behind anything sex related." Thorne further said, "I am a mainstream face and when you have a voice, a platform, you try to use ... in helping others and advocate for something bigger than yourself. Again in this process I hurt you and for that I’m truly sorry."

PT1 Remove the stigma behind sex, sex work, and the negativity that surrounds the word SEX itself by bringing a mainstream face to it that’s what I was trying to do, to help bring more faces to the site to create more revenue for content creators on the site.

(The above story first appeared on LatestLY on Sep 02, 2020 06:11 PM IST. For more news and updates on politics, world, sports, entertainment and lifestyle, log on to our website latestly.com).